THE MYTH OF “FAT BURNING FOODS” 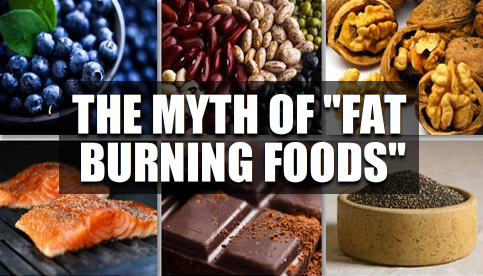 You’ve seen flashy titles like this floating around in articles, videos and advertisements all over the web…

“3 Fat Burning Foods You MUST Eat!”

Whether it be dark chocolate, avocado, grapefruit, almonds or oatmeal, the basic idea here is that certain food sources possess special inherent “fat burning properties” that will directly increase your rate of fat loss when consumed.

The notion that simply adding a particular food to your diet will “speed up metabolism” or “increase fat burning hormone levels” sounds great on paper, but is there any real truth to it?

Well, as you probably guessed from the title of this article… no, not really.

The truth is that, depending on how you interpret the phrase, the concept of “fat burning foods” is either completely false, or at best it’s only very slightly true, but not to any degree that makes it worth worrying about.

Why There’s No Such Thing As A “Fat Burning Food” 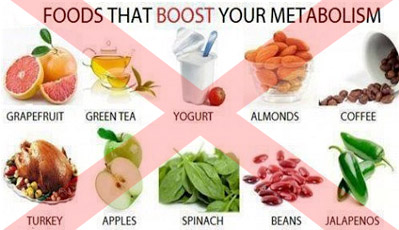 The literal idea of a “fat burning food” is essentially an oxymoron that directly contradicts itself.

This is because ANY food item that contains calories will always result in a net increase in your total calorie intake for the day.

There’s no such thing as a “negative calorie food” or “free food” that you can just eat in unlimited quantities like so many people try to claim.

If you eat something, your overall calorie intake for the day increases, period.

This is a fairly basic concept that most fat loss dieters already understand, but for beginners who are just starting out, it can actually be a very dangerous trap to fall into.

They’ll come across a misleading article telling them that, for example, “coconut oil is a fat burning food”, and then think that liberally adding it to their meals is going to help speed up their results.

In reality, all they’re really doing is adding extra calories to their diet and shifting their net energy balance in the wrong direction.

When you consider that a typical calorie deficit for fat loss will be somewhere around 500 calories below one’s maintenance level, all it really takes is a few extra food items here and there to hugely minimize or even completely erase that deficit altogether.

For example, 2 tablespoons of coconut oil would instantly add about 250 calories to your overall intake for the day all on its own.

Combine that with a couple handfuls of so-called “fat burning almonds” and you’ve instantly taken yourself from a position of losing fat every single week to a position of maintaining or even gaining fat over the long term.

What needs to be understood is that effectively losing body fat is a matter of your overall diet as a whole, and NOT the result of which specific food items you do or don’t consume.

Fat loss is all about the big picture, and there is only such a thing as a fat burning diet versus a fat storing diet, and NOT a “fat burning food” versus a “fat storing food”.

Yes, getting the bulk of your food intake (around 80-90%) from minimally processed, nutrient-dense whole foods is a wise idea for overall health reasons…

And yes, including foods with low calorie density relative to their volume (such as vegetables) is a good way to keep yourself feeling full without adding a large number of calories to your total intake…

But the idea that certain food items are somehow “mandatory” or “forbidden” in a fat loss diet is flat-out false.

All it really comes down to is ensuring that your total calories for the day are landing in the proper range, and that you’re deriving those calories from a good balanced mix of protein, carbohydrates and fats.

Do this and you will lose body fat consistently, regardless of whether chia seeds, raspberries or quinoa are specifically included as part of it.

Where The Concept Of “Fat Burning Foods” Sort Of  Makes Sense 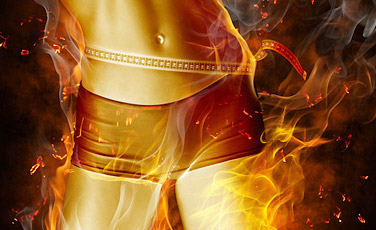 So, we’ve established that adding a particular food to your diet can never increase your rate of fat loss in and of itself, but what about replacing one food item with an equal number of calories of a different food item?

This is where the concept of “fat burning foods” is somewhat true, and it’s a result of the “thermic effect of food” (“TEF” for short) which refers to the number of calories the body must expend in order to digest a particular food item.

Adding a food item into your diet will always contribute positively to your net calorie intake, but taking, say, 200 calories of one food and replacing it with 200 calories of another food can technically make a small difference.

This is because digestion itself requires energy, and the body always has to put in a little bit of work first in order to extract the calories from the foods you eat.

The reason why some food items could technically be seen as more “fat burning” in comparison to others is because the 3 major macronutrients each have varying thermic effects.

There are no universally agreed on numbers, but these are the usual estimates you’ll come across…

What this means is that if you were to eat, say, 100 calories worth of fat, your body would expend 3-5 calories in order to digest it, and the net result would be 95-97 calories added to your total calorie intake for the day.

On the other hand, if you were to eat those same 100 calories from protein, your body would expend 25-30 calories during digestion, and the net result would be 70-75 calories added to your intake.

In this sense, high protein foods technically “burn more fat” in comparison to high fat foods (assuming the total calorie content is the same), since the body expends more calories to digest the protein in comparison to the fat.

What practical implication does this actually have for the average fat loss dieter?

Well, not much, and this is why I refer to this concept as only being “partially true”.

Some people will learn about TEF and then wonder if eating nothing but high protein and high fiber foods is the answer to improved fat loss, since it will allow them to maximize overall calorie output.

It’s really not that simple though, and for a few important reasons…

First off, even though fat has a very low thermic effect in comparison to carbs and protein, you still need a certain amount of dietary fat each day for health reasons.

Very low fat diets will negatively affect hormone levels, brain function and will cause your appetite to increase, and strictly limiting fat intake is almost never a good idea.

Secondly, most dieters won’t perform their best by following a low carb diet.

It can work fine for some, but in the majority of cases, going too low on carbs simply leads to low energy levels, decreased mental focus and a negatively impacted mood.

This causes training performance and motivation to suffer and greatly decreases the chances of long-term adherence to the diet.

And thirdly, TEF only makes up a small percentage of your total calorie burn for the day anyway at about 10%.

For that reason, structuring your diet around maximizing TEF at the expense of proper macronutrient balance is almost certainly going to do you more harm than good.

And by simply following these basic guidelines, you’ll already produce a good overall thermic effect from your diet without the need to worry about it any further. 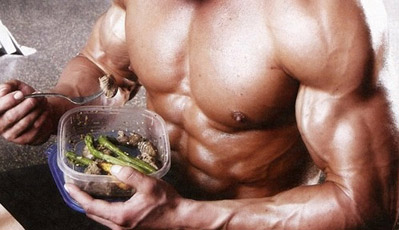 At the end of the day, the entire concept of trying to structure your diet around the “best fat loss foods” just isn’t something to concern yourself with.

Whether you eat avocado vs. peanut butter, banana vs. mango or chicken vs. fish is really a non-issue in the big picture, and proper total daily calorie consumption combined with a balanced overall macronutrient intake is where your primary focus should always be.

The thermic effect of food does play a role in determining your total calorie expenditure for the day, but trying to strategically maximize TEF is not recommended since it will throw your daily macronutrient balance off, and since it only makes up a small portion of total calories burned anyway.

“I CHEATED ON MY DIET – WHAT SHOULD I DO?”
IS EATING CARBS BEFORE BED BAD FOR FAT LOSS?
HUNGRY WHILE CUTTING? 12 WAYS TO REDUCE HUNGER ON A DIET
THE REAL TRUTH ABOUT INTERMITTENT FASTING
20 COMMON BODYBUILDING MYTHS DEBUNKED
TRAINING EACH MUSCLE ONCE PER WEEK (EFFECTIVE OR WASTE OF TIME?)