THE BIG PROBLEM WITH “CHEAT DAYS” (DO THIS INSTEAD)

March 1, 2016
Sean Nalewanyj
Nutrition
No Comments on THE BIG PROBLEM WITH “CHEAT DAYS” (DO THIS INSTEAD)

So, you’ve been training hard in the gym and have stuck with your fat loss diet closely throughout the week…

And now it’s time to enjoy a “cheat day” where you’ll reward yourself by simply enjoying whatever foods you’d like in whatever quantities you desire.

After all, it’s only one day out of the week, and since you’ve worked so hard over the previous six, it can’t do any harm, right?

In fact, if you aren’t careful, an all-out cheat day can easily throw your entire fat burning plan off course and erase much or even all of your training and dieting efforts from the previous week.

Why “Cheat Days” Are A Bad Idea 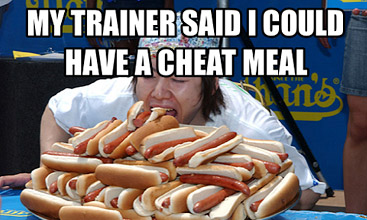 Those who follow my content know that I’m a huge proponent of flexible dieting (also referred to as “IIFYM” or “if it fits your macros”), and yes, it is entirely possible to enjoy some high-fat/high-sugar food on a consistent basis and still get very lean in the process.

In other words, in the big picture over the course of a few days and weeks, you must maintain a net calorie deficit by burning more calories than you consume.

If you don’t have a proper calorie deficit in place, you aren’t going to lose any fat at all.

For example, let’s say you were following a standard deficit of 500 calories below your maintenance level. (This is what I recommend as a good starting point for most people)

This would mean that over the course of 6 days, you would have created a total deficit of 3000 calories.

If you now go ahead with your “cheat day” on the 7th day, every calorie that you consume above your maintenance level will be directly counteracting that 3000 calorie deficit you had in place.

Everyone has differing appetites, but what if that involved eating an extra 1500 calories above maintenance?

This is something that would be fairly easy for most people to do on a typical cheat day, and it would result in your overall calorie deficit being immediately cut in half.

And this is only a modest example.

For those with bigger appetites who take the concept of cheat days a bit further, taking in 2000 or even 3000 calories above maintenance is not unrealistic at all.

This all adds up very quickly and can easily amount to way more total calories than you might think.

Not only that, but because you’ve been in a calorie deficit during most of the week, your cravings for high-calorie foods will be much higher than normal.

It’s simply hard-wired for survival and wants to get back to equilibrium where calorie intake meets calorie demand, and this will make all those delicious foods even harder to resist once you get going.

To make matters even worse, many dieters are given even more permission to go crazy and “splurge” on their diet by the many trainers and online “fitness experts” out there who claim that cheat days are actually beneficial for fat loss.

They’ll tell you to go ahead and eat whatever you want in whatever amount you feel like, since this will “keep the body out of starvation mode” and “boost your metabolism” by increasing levels of leptin, a hormone that plays a central role in regulating metabolic rate.

This is of course completely false, as the increased calories you’ll be consuming will easily and hugely offset any modest additional fat burning effect you’d obtain from a temporary boost in leptin.

In any case, go ahead and wolf down 4000 or 5000 calories on a cheat day and you’ll essentially be erasing your entire calorie deficit altogether, or at the very least, shrinking it down to an amount that will make noticeable fat loss all but impossible to achieve in the long run.

On top of all of this, as I covered in last week’s post (The #1 Reason Why You Can’t Lose Weight), a good percentage of dieters don’t even track their calorie deficit properly throughout the week to begin with.

They may think they’re maintaining a 500 calorie deficit on those 6 days of the week, but in reality, errors in calorie-tracking actually have them eating at a much smaller deficit than they realize.

This makes cheat days all the more dangerous, and in extreme cases they can even cause some people to gain weight even though their goal is to lose it.

Forget About “Cheat Days” And Do This Instead

If you want to enjoy your favorite foods on an ongoing basis and still achieve the lean body you’re after, here’s what I’d suggest doing…

First off, forget about the idea of “cheat days” and “cheat meals” altogether.

Instead, focus on developing an overall lifestyle where higher fat and higher sugar foods are simply a part of your regular diet but are just eaten in moderation.

Rather than starving yourself during the week and then eating a ton of “cheat foods” on one day, merge the two together in a balanced way.

Make sure your diet is primarily based on nutrient dense whole foods such as high quality proteins, minimally refined carbs, fruits, veggies and healthy fats, and then once those bases are covered, allow for 10-20% of your total calorie intake to come from whatever foods you’d like.

Rather than thinking of them as “cheat foods” or feeling that you’re somehow “breaking the rules” by eating them, just view them as a normal part of an overall diet that is healthily balanced both in terms of nutrition and enjoyment.

This approach ensures that you’re getting the high quality foods required to meet your overall health, muscle building and fat burning needs, but that you’re also getting the physical and mental satisfaction of eating the foods you most enjoy.

How exactly should you lay this out during the week?

Ultimately it just comes down to personal preference.

If you like the idea of being able to eat those higher calorie foods every single day but in smaller amounts, then use that approach. Or, if you get more satisfaction out of eating bigger portions of them but less often, that’s fine too.

Just make it fit into your overall calorie intake for the week and then lay it out in whatever way you enjoy most.

The second thing you can do is to incorporate a “refeed day” once a week.

Rather than eating at an unmonitored calorie surplus like you would on a cheat day, a refeed day takes a more modest approach and has you eating at your calorie maintenance level instead, with the majority of the increase coming from carbohydrates.

This will allow you to consume roughly an extra 500 calories or so on your refeed days, which would equal out to around 125 grams of additional carbs.

This is a large enough amount to give you a nice little break from your diet and enjoy some extra food, but it’s also a small enough amount that your fat loss efforts won’t be hindered.

A refeed day may also help to offset some of the typical “dieting side effects” that usually kick in after a prolonged calorie deficit, such as decreased energy levels, decreased mood and increased appetite by giving you that extra boost in calorie intake once a week.

Note: Everything I’ve outlined up to this point in regards to cheat days also applies to muscle building programs as well. In this case, all-out cheat days won’t hinder your actual muscle growth, but they’ll just cause you to put on an excessive amount of body fat. Also, refeed days don’t apply to bulking phases since you’ll already be eating in a daily calorie surplus. 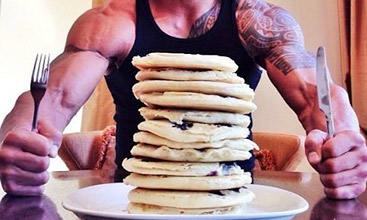 If you have been using the typical “cheat day” approach and are able to exercise moderation with it while consistently losing fat, then by all means continue.

However, if you find yourself stuck in back and forth cycles of calorie deprivation followed by huge calorie overconsumption (and the scale isn’t budging as a result of that), then ditch the cheat days altogether and…

Following these two simple steps will allow you to lean down effectively while still eating all of your favorite foods on an ongoing basis, and without unintentionally sabotaging your results.

To get a complete step-by-step plan that shows you how to eat and train in a way that is highly effective but also enjoyable and sustainable, make sure to check out my interactive video presentation below…

HOW MUCH MUSCLE CAN YOU GAIN NATURALLY, AND HOW FAST?
HOW TO TAKE CREATINE: YOUR DEFINITIVE GUIDE
LOSING STRENGTH WHILE CUTTING?
5 QUICK FIXES
20 LOW CALORIE SAUCES TO ADD FLAVOR TO YOUR FOODS
IS CARDIO NECESSARY TO LOSE FAT DURING A CUTTING PHASE?
IS COUNTING MACROS NECESSARY TO BUILD A GREAT PHYSIQUE?