IS THERE A MAXIMUM PROTEIN INTAKE LIMIT PER MEAL?

July 18, 2012
Sean Nalewanyj
Nutrition, Protein
No Comments on IS THERE A MAXIMUM PROTEIN INTAKE LIMIT PER MEAL? 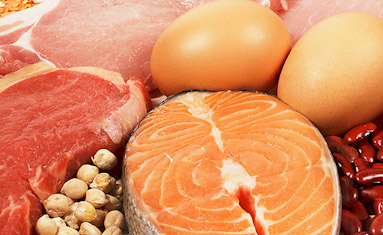 The bodybuilding world is full of an endless number of well-accepted “truths” that most lifters blindly incorporate into their programs without questioning them first.

A common “truth” is the idea of a maximum protein intake limit per meal, usually in the range of about 30-50 grams. Those who promote this guideline state that the body can only absorb a set amount of protein in a single sitting, and that any more will simply go to waste.

The real questions we need to ask ourselves are…

“Where did this maximum protein intake limit per meal guideline come from?”

“What concrete research is there to support them?”

The honest answers are “who knows?” and “none”.

In other words, we don’t know where the numbers came from, and there is absolutely no reliable real-world evidence to back them up.

In order to examine this issue closer, we need to take a look at a few important factors…

1) The process of protein digestion is far more complex than most people could imagine.

We’re not talking about a simple matter of chewing up some food, having it travel to the stomach, being mixed with other substances and then absorbed in the small intestine. The actual process involves all sorts of “fancy” enzymes (such as protease, peptidase and trypsin just to name a few) and other substances such as HCL, bile, gastrin and CCK that are all secreted from the mouth, stomach and small intestine.

In addition, there are numerous sites along the digestive tract where protein digestion takes place, and it is far more than a simple black and white issue. Because of the incredible complexity of the digestion process, it would be extremely difficult to determine a maximum protein intake limit per meal that could be fully assimilated versus what is “wasted”.

Despite the fact that most “experts” will tell you that you need to consume a serving of protein every 3 hours throughout the day, protein digestion/absorption happens much more gradually than that.

Given these digestion rates, having a set maximum protein intake limit per meal really makes no sense. For example, if you consumed just 30 grams of cooked egg protein in one meal, it would take a full 10 hours before that protein was fully assimilated by your body. Does that mean if you ate 30 grams of egg protein, you wouldn’t be able to eat any more protein for another 10 hours? Or that if you consumed 50 grams of whey, you’d have to wait 5-6 hours before you could eat again?

You can see where this is going.

Why not 26, 41 or 53? It seems like this guideline was simply created by some random guys on a discussion forum for convenience sake.

4) What about individuals who have a daily protein intake of, say, 250 grams?

Even 7 full meals at 30 grams of protein each would only equate to 210 grams at the end of the day. Using the 30 grams of protein per meal guideline, those with higher protein intakes would be literally unable to reach their daily amounts without consuming 8 meals, 9 meals or more.

They’re not based on anything but random speculation and there is currently no concrete evidence to suggest that the body “wastes” protein beyond a certain amount per sitting.

From an evolutionary perspective this wouldn’t make sense anyway. Our hunter-gatherer ancestors rarely had a readily available source of food, and long periods of starvation followed by short periods of gorging would have been commonplace.

It’s a pretty reasonable conclusion that if their bodies were only capable of absorbing 30-50 grams of protein in a single sitting (and simply tossed out everything else), we would not have survived as a species.

If one of your daily meals adds up to 70 grams of protein, don’t worry about it.

Larger meals will simply take a longer period of time to be fully digested and absorbed, and any practical sized meal you could eat is not going to go to waste.

WHY CHANGING YOUR WORKOUT TOO OFTEN IS A MISTAKE
“BRO SPLIT” ROUTINES: ARE THEY EFFECTIVE FOR BUILDING MUSCLE?
THE MYTH OF “FAT BURNING FOODS”
HOW TO LOSE CHEST FAT AND GET RID OF “MAN BOOBS”
20 LOW CALORIE SAUCES TO ADD FLAVOR TO YOUR FOODS
THE BEST BODYBUILDING CARBS SOURCES FOR MUSCLE GROWTH