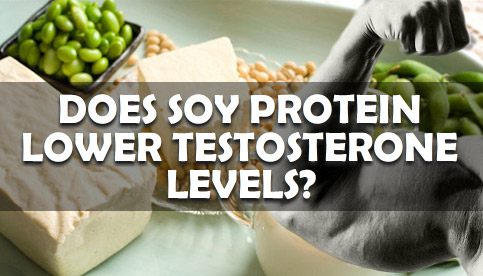 The idea that men should avoid soy protein has been a pretty commonly accepted “fact” in the bodybuilding and fitness community for quite some time.

For years it’s been said that soy protein will increase estrogen levels and lower testosterone levels, leading to all kinds of unwanted side effects such as reduced muscle growth, increased fat gain, “man boobs”, lowered libido and more.

For guys in the gym wanting to maximize their muscle size and strength gains, that sounds like a pretty good list of reasons to leave the soy protein on the shelf.

But is all of this “soy protein hysteria” actually based on real science, or is it just another one of those fitness myths that gets passed around from person to person without any reliable basis? Do soy and bodybuilding mix?

Soy Protein And Testosterone: The Facts 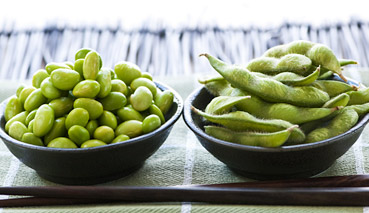 You may be asking this question because you’re a vegan or vegetarian who uses soy as a staple protein source, or you’re just someone who enjoys consuming soy as part of their overall diet from foods such as tofu, tempeh, soybeans or soy milk.

It is true that soy contains compounds known as “phytoestrogens”, but it’s important to note that these are plant-derived and are different from the estrogen found in the human body. Just because these compounds contain the word “estrogen” does not automatically mean that they’ll have a negative impact on your actual testosterone or estrogen levels.

And if we take a look at the concrete studies available that examine the supposed connection between soy protein and testosterone, that’s basically what we see…

According to the available research, soy protein does not lower testosterone levels in men to any statistically significant degree.

Any studies that have shown a decrease either involved the consumption of huge amounts of soy protein over an extended period, or the testosterone reduction was minor and temporary, returning back to baseline fairly quickly. 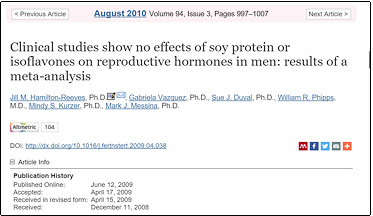 In 2010 a meta-analysis was conducted combining the data from 15 controlled studies and 32 other reports to see if any correlation between soy protein and testosterone or soy protein and estrogen could be found.

Looking at single studies often doesn’t provide enough information (due to potential errors or researcher bias), and a meta-analysis provides a much clearer picture by examining all of the available studies in order to reach a stronger conclusion.

What was the conclusion in this case?

“The results of this meta-analysis suggest that neither soy foods nor isoflavone supplements alter measures of bioavailable T concentrations in men.”

Source: Clinical studies show no effects of soy protein or isoflavones on reproductive hormones in men: results of a meta-analysis.

It also made no difference whether the participants were consuming a large amount of soy protein (45g or more per day) or only a small amount (5g or less per day), or whether they consumed it for an extended period of time (4 months or more) or only a brief period (1 month or less). 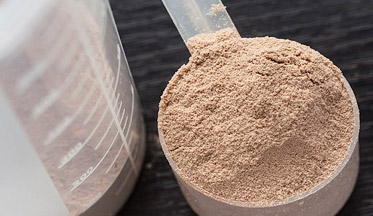 There is also research available comparing the effects of soy protein vs. whey protein when consumed in combination with weight training, and those studies have basically echoed the same thing.

The first study from Dr. Douglas Kalman and colleagues looked at the effects of 4 groups of participants consuming either soy protein isolate, soy protein concentrate, whey protein, or a mixture of whey and soy.

It is true that estrogen levels fell slightly lower in the whey protein group and that testosterone levels decreased in the soy protein concentrate group, but this was not to any statistically significant degree and therefore shouldn’t be any cause for concern.

The conclusion of the researchers stated:

“This investigation shows that 12 week supplementation with soy protein does not decrease serum testosterone or inhibit lean body mass changes in subjects engaged in a resistance exercise program.”

The second study from Dr. William Kraemer examined the hormonal effects of soy protein vs. whey protein vs. maltodextrin.

The 3 participating groups performed resistance training involving 6 sets of 10 reps using 80% of their one-rep max and then gave blood samples following the exercise to see how hormone levels were affected.

Although testosterone levels did increase across all groups, it was shown that soy protein had a temporary blunting effect as T levels did drop faster in comparison to the whey protein and maltodextrin groups.

This might sound like bad news, but it’s important to note that the effect was short-lived and that testosterone levels in all groups returned back to baseline within 30 minutes.

Source: The effects of soy and whey protein supplementation on acute hormonal reponses to resistance exercise in men. 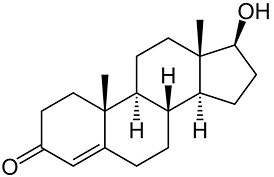 This brings me to another important point, which is that small, transient decreases in testosterone are likely nothing to worry about in the big picture.

Just because a particular substance or activity “lowers testosterone” really doesn’t say anything in and of itself, as the resulting consequences of that decrease completely depend on how significant the drop is and how long it is maintained for.

In order for your bottom line rate of muscle growth or fat loss to be negatively affected in any measurable way, not only do testosterone levels need to be decreased, but they need to be decreased by a significant margin AND they must remain there for a prolonged period of time.

Testosterone levels naturally fluctuate all throughout the day, and small up and down spikes of 5% here and 20% there over a temporary period are not going to make any real difference.

How Much Soy Protein Is Okay? 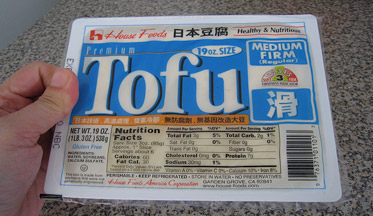 Now, despite the data that I’ve just presented, this does not necessarily mean that I’m recommending an all-out “soy-free-for-all” or that I’m guaranteeing that ongoing consumption of large amounts of soy will definitely not have any negative consequences at all.

Although the majority of available studies show that consuming soy in moderate amounts isn’t a cause for concern, there IS still some data showing a certain connection between soy protein and testosterone, and likely in a dose-dependent manner.

For that reason I would still recommend that you exercise some basic moderation just to be on the safe side by limiting yourself to 1 or 2 servings of soy per day at a maximum of 25-30 grams of actual soy protein per day.

It’s of course possible that consuming more than this could be totally fine (and that’s a choice you can make for yourself), but all things considered I’d still suggest putting certain limits on your intake just to err on the side of caution.

This shouldn’t even be an issue in the first place though since most people will be consuming a variety of different protein sources as part of their diet (this is especially important for vegans) and I don’t know too many people out there who would even want to consume huge amounts of soy at all hours of the day anyway.

If you’re simply having a typical sized serving of some tofu or soybeans one or two times a day like most typical “soy-eaters” would be doing, it’s likely nothing to worry about when it comes to estrogen or testosterone levels.

The Bottom Line On Soy Protein And Testosterone 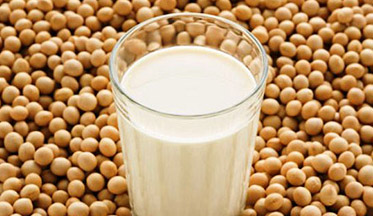 Despite all the information circulating around online claiming that men should avoid soy protein at all costs, there’s simply no reliable research out there to substantiate that claim.

While it is possible that the consumption of soy protein in large amounts over an extended period of time could have negative effects (though this is only speculation), there’s just no good reason to suspect that eating soy foods in moderation should be a problem in terms of testosterone or estrogen levels in the body.

Soy protein and bodybuilding can certainly mix, and if you enjoy your tofu, tempeh, soybeans or whatever other soy foods you may be consuming, I’d simply recommend consuming them within practical limits just to be on the safe side and not worrying about it beyond that.

If you found these tips helpful, make sure to get your personalized training, nutrition and supplement plans using my free interactive video presentation below… 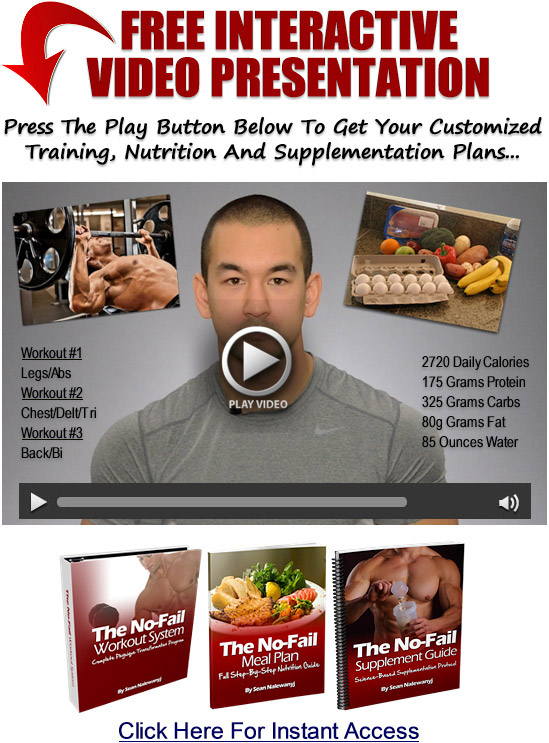 HOW LONG TO REST BETWEEN SETS TO BUILD MUSCLE & GAIN STRENGTH
7 WAYS FITNESS SUPPLEMENT COMPANIES ARE RIPPING YOU OFF
TRAINING EACH MUSCLE ONCE PER WEEK (EFFECTIVE OR WASTE OF TIME?)
10 SIMPLE WAYS TO INCREASE TESTOSTERONE LEVELS NATURALLY
“I CHEATED ON MY DIET – WHAT SHOULD I DO?”
“AM I OVERTRAINING?” – 10 SIGNS YOU’RE TRAINING TOO HARD