April 15, 2015
Sean Nalewanyj
Quick Tips
No Comments on WHAT IS KRE ALKALYN?

Ever since the original creatine monohydrate supplement was released onto the market in the 1990’s, companies have been rushing to create the “next big thing”.

Since then, an endless mass of different “new and improved” creatine forms have shown up, all promising huge benefits above and beyond what monohydrate provides.

One of these forms is “buffered creatine”, most commonly marketed under the name “Kre Alkalyn”.

The makers of this form state that it is a “100% stable” version of creatine that is less likely to be converted into the waste product creatinine.

It is claimed to be “10 times more powerful” than creatine monohydrate without causing any cramps, bloating or upset stomach.

It is also said to have a superior absorption rate, allowing the user to consume less total creatine and get the same benefits.

1) The idea that a particular creatine “does not cause cramps or bloating” is a complete non-issue.

Creatine monohydrate does NOT cause these problems, and it is the most studied sports supplement in history.

Companies who claim that creatine monohydrate will result in cramps or bloated muscles are simply inventing a problem that doesn’t even really exist.

Kre Alkalyn may not cause bloating, but neither does monohydrate.

It should also be noted that Kre Alkalyn is actually 98% creatine monohydrate already, with only 2% making up the “buffer”.

2) Kre Alkalyn has been shown with research to provide no additional benefits above and beyond creatine monohydrate.

A study in the September 2012 issue of The Journal Of The International Society Of Sports Nutrition concluded:

This study even tested a group using far more Kre Alkalyn than is recommended on the product label.

You can find the full details of that study by clicking here.

Kre Alkalyn has never been shown with concrete research to be superior to creatine monohydrate in any way, yet it is significantly more expensive on a gram for gram basis.

What Is Kre Alkalyn: Conclusion 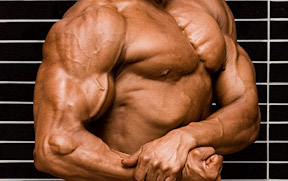 It is up to you to decide where to spend your supplement dollars, but hopefully the information in this article has answered your question of “what is kre alkalyn” and provided some insight so that you can make your own decision.

My recommendation is to always stick with proven, research-based supplements, and that’s why I always go with 100% CreaPure creatine monohydrate.

This is the highest grade form of creatine on the market and has the largest body of research supporting its benefits in bodybuilders and athletes.

8 POPULAR “FAT BURNER SUPPLEMENTS” TO LEAVE ON THE SHELF
HOW LONG TO REST BETWEEN SETS TO BUILD MUSCLE & GAIN STRENGTH
“DOES CARDIO BURN MUSCLE AND KILL GAINS?”
BEST INNER CHEST EXERCISES? (HOW TO BUILD INNER PECS)
WHY CHANGING YOUR WORKOUT TOO OFTEN IS A MISTAKE
HOW LONG DOES IT TAKE TO LOSE MUSCLE AFTER A GYM LAYOFF?