ARE BCAA’S WORTH IT? (BRANCHED CHAIN AMINO ACIDS REVIEW)

May 17, 2016
Sean Nalewanyj
Supplementation, Supplements To Avoid
No Comments on ARE BCAA’S WORTH IT? (BRANCHED CHAIN AMINO ACIDS REVIEW) 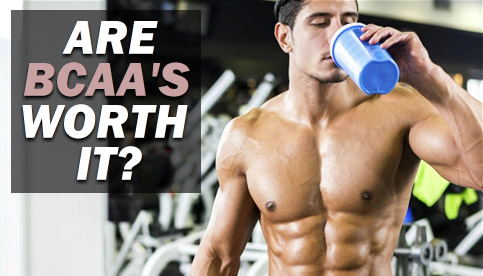 Branched chain amino acids continue to remain as one of the most widely used bodybuilding supplements on the market.

Walk into a crowded gym at any given time and you’re bound to spot at least one guy sipping bright pink liquid from a 4 liter milk jug, and you can be sure that this special intra-workout concoction is at least partly made up of BCAA powder.

But despite their popularity and the anecdotal praise they receive from so many lifters out there, are BCAA’s necessary for the average trainee?

Let’s break it down step by step… 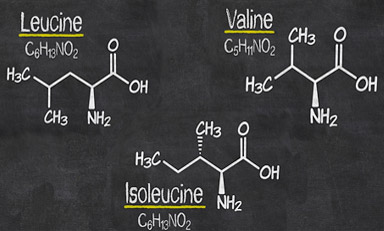 Proteins are made up of individual building blocks called amino acids, and the branched chain amino acids refer to leucine, isoleucine and valine, named this way because of their branching chemical structure.

All three are essential amino acids (meaning the body cannot produce them on its own) and are highly involved in the regulation of muscle mass both through their anabolic and anti-catabolic effects.

In supplemental form, BCAA’s are typically consumed before, during and/or after training at a combined dosage of anywhere between 10-20 grams.

The 3 primary claimed benefits of BCAA supplementation are that they:

Certainly a great list of effects for anyone looking to build muscle and lose fat, but what does the actual science say when it comes to each of these benefits?

Nothing too exciting actually, and here’s why…

The Benefits Of BCAA’s Debunked 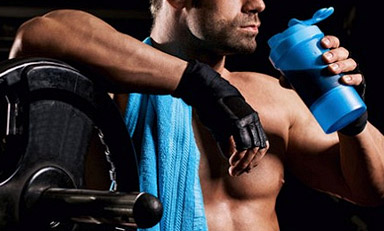 While it is true that the branched chain amino acids play a central role in the muscle building process, what most people fail to consider is the fact that virtually all high quality whole food protein sources are already very high in BCAA content as is.

Typical high protein foods like whey, chicken, beef, seafood etc. all clock in at anywhere between 15-25% BCAA’s per gram of protein, providing around 4-6 grams in every standard serving you consume throughout the day. 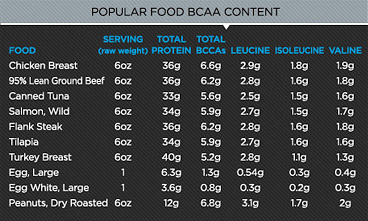 Many popular vegan protein sources are also rich in BCAA’s on a gram for gram basis as well, such as brown rice protein, pea protein, soy and hemp just to name a few.

In other words, as long as you’re consuming enough total dietary protein each day, you’ll already be receiving more than enough BCAA’s in order to optimize your gains.

Keep in mind that just because some BCAA’s are good doesn’t automatically mean that more are better, and there’s a finite cap on how much your body actually requires in order to max out their effects.

For that reason, consuming an extra 10 or 20 grams of BCAA powder on top of the high amount you’re already receiving from your normal diet is highly unlikely to provide any additional benefits.

For example, it’s been hypothesized that protein synthesis is maximally stimulated off of just 2-4g of leucine per meal, and this can easily be achieved from whole foods alone without the need for any extra supplementation.

This is probably why the only studies that show significant benefits from supplemental BCAA’s are those that were conducted in the absence of proper protein intake.

For example, several studies have shown noteworthy effects when comparing the consumption of BCAA powder on its own with a placebo, but no reliable research has been able to replicate these effects when BCAA’s are used in combination with sufficient ongoing protein intake.

It’s certainly not surprising that BCAA’s are better than nothing, but this doesn’t tell us anything about whether free form BCAA’s are actually superior to a simple scoop of whey protein or a chicken breast, and I can’t see any good reason to assume that they would be.

As your workout drags on for longer periods of time, BCAA levels become depleted in the body and the amino acid tryptophan begins entering the brain at an increased rate.

This influx of tryptophan causes serotonin levels to rise, producing feelings of physical and mental fatigue.

BCAA’s blunt this natural rise in serotonin by preventing tryptophan from entering the brain, and this is why many lifters supplement with BCAA’s as an intra-workout performance aid to boost strength and energy levels.

However, there are two key points to consider here…

First off, this will typically only be a concern during very long and exhaustive workouts, such as those that an endurance athlete might perform.

If you’re simply going into the gym to carry out a standard 60-90 minute bodybuilding workout with normal rest periods inserted throughout, intra-workout BCAA’s are probably not going to be noticeably helpful in that context.

Secondly, even though BCAA’s do decrease tryptophan uptake, they also decrease tyrosine uptake as well.

Tyrosine is an amino acid that improves mental focus and energy (this is why it’s often included as an ingredient in pre-workout supplements), so there may actually be a counter-acting effect there and could partly explain why most research only shows a very modest performance benefit at best from BCAA supplementation.

Once again, the only research demonstrating a reduction in muscle soreness was conducted when BCAA’s were used alone without any additional whole food protein.

All this really tells us is that pure BCAA’s are superior to pure carbohydrates for this purpose, but it’s perfectly plausible (and quite likely) that this effect would be mimicked by simply consuming adequate dietary protein and obtaining your branched chain amino acids that way.

If you are looking for an effective supplement to reduce the effects of delayed onset muscle soreness, I’d suggest checking out citrulline malate instead.

Instead Of Buying BCAA’s, Just Do This 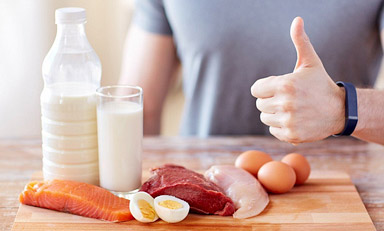 Rather than running out and spending your hard-earned money on a bottle of BCAA powder every single month, just focus on consuming adequate dietary protein instead.

0.8-1g of protein per pound of body weight daily is a reliable guideline to follow and will easily provide your body with all of the branched chain amino acids it requires to optimize muscle recovery and growth.

Not only is there no convincing reason to supplement with free form BCAA’s on top of your regular protein intake, but it’s not as if they’re a cheap supplement either.

Branched chain amino acids are actually fairly pricey on a gram for gram basis, and they’ll probably run you anywhere between $20-$40 per month depending on the dosage you’re using.

That cost will add up quite a bit over the longer term (it’s between $240-$480 per year), and would be put to far better use on the things that truly matter in your fitness plan, such as your grocery bill and gym membership. 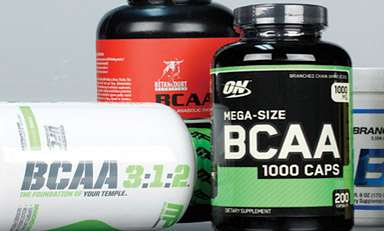 I use the word “might” very purposefully here as I can’t even say for sure if they’d be useful in these situations, but here are a few exceptions where the inclusion of a BCAA supplement could potentially provide benefits that justify their use…

If you’re following an intermittent fasting protocol or just prefer to hit the gym on an empty stomach, 10g of BCAA’s taken 30-45 minutes before your session may have legitimate use in terms of preventing excessive muscle loss during your workouts.

Keep in mind though that BCAA’s do contain about 6 calories per gram (the fact that they’re listed as 0 calorie is simply a labelling loophole since calories only need to be stated if they’re coming from a whole food protein) and so by ingesting BCAA’s pre-workout you technically wouldn’t be training in a truly fasted state.

If you’re following a higher volume training style consisting of a large number of sets that exceeds 90 minutes per session, BCAA’s could be experimented with to see if they deliver improvements in strength and energy levels.

However, the supporting research in this area still only shows minor benefits at best and I wouldn’t expect much here other than a possible small extra boost.

If for some reason you were eating significantly less than 0.8 grams of protein per pound of body weight daily, supplemental BCAA’s could be used to ensure that you’re receiving enough of them to maximize protein synthesis.

If you’re a highly serious lifter trying to squeeze out every possible ounce of muscle growth and you have the extra money to spend, BCAA’s could be included merely for the off chance that they might provide a modest additional muscle building benefit over the long term.

Do BCAA’s Work? The Bottom Line 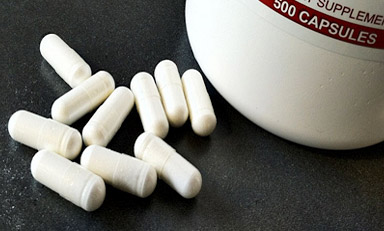 Assuming that you’re getting in a sufficient amount of total protein each day from a variety of sources, I can’t see any reason to run out and spend your money on BCAA supplements.

There’s no convincing research to demonstrate that additional free form BCAA’s are of any significant use to the average trainee, and they’re fairly pricey on a gram for gram basis as well.

Except for the few select situations that I mentioned above, my advice is to just stick to the basics when it comes to supplements and leave the BCAA’s on the shelf.

“I CHEATED ON MY DIET – WHAT SHOULD I DO?”
THE BENEFITS OF A “DELOAD WEEK” (AND HOW TO DO IT PROPERLY)
7 SIDE LATERAL RAISE MISTAKES TO AVOID FOR BIGGER SIDE DELTS
“DOES CARDIO BURN MUSCLE AND KILL GAINS?”
CAN YOU BUILD MUSCLE WITH ONLY 2 WORKOUTS PER WEEK?
HOW TO RETURN TO THE GYM AFTER A TRAINING LAYOFF