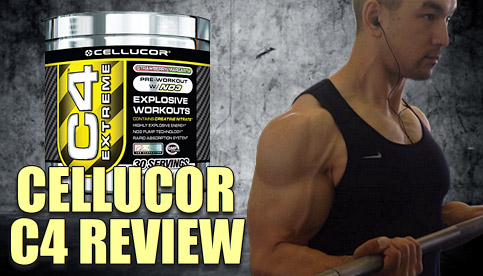 It’s been one of the top-selling bodybuilding supplements on the market for several years now, but is all the hype surrounding the Cellucor C4 Pre-Workout really justified?

You’ll find plenty of other C4 reviews online if you run a quick search, but the majority of them are either put out by supplement retailers trying to sell the product to you, or by those who only give very vague, generalized overviews without any real science to back it up.

In today’s post I’ll be giving you a completely unbiased, evidence-based breakdown of the C4 pre-workout by discussing the ingredients, dosages, taste and effectiveness so you can decide if this supplement is really worth your money. 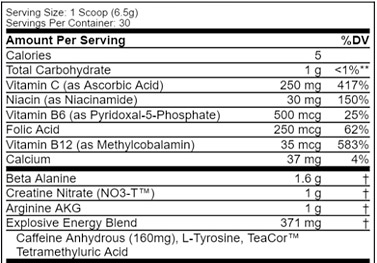 As you can see from the label, the main components of the C4 formula are beta alanine, creatine nitrate and arginine AKG, along with an “energy blend” containing caffeine anhydrous, l-tyrosine and tetramethyluric acid.

Let’s go over each of these ingredients one by one…

Beta alanine is a non-essential amino acid that works by increasing intramuscular levels of a compound called “carnosine”.

This increase in carnosine helps to neutralize the buildup of hydrogen ions, which are metabolic waste products that accumulate in the muscle tissue and increase overall acidity and fatigue.

By increasing carnosine levels through beta alanine supplementation, you’ll be able to prolong the point of muscular failure and improve overall strength and endurance when training in medium to higher rep ranges.

While beta alanine is an effective performance-boosting supplement that I do recommend, C4 only provides 1.6g per scoop, which is half the minimum research-backed dosage of 3.2-6.4g.

You could take 2 scoops to get the full 3.2g, but that will bump the cost per serving up to a fairly high amount, and as you’ll see shortly, it would still leave certain ingredients under-dosed anyway.

Creatine itself is also a highly research-supported compound (it’s the most comprehensively studied sports supplement on the market in fact) and has been consistently shown to improve strength and power during explosive activities like weight training.

It also increases intramuscular water retention which can provide a small increase in overall muscle fullness in those who respond well to it.

However, there is currently no research available to show that any form of creatine provides greater benefits than the original creatine monohydrate form.

Creatine monohydrate has an extremely high absorption rate in the body and will fully saturate the muscles with creatine after about 2-3 weeks of consistent use at 3-5g per day.

All of the “advanced” forms of creatine that have come out over the years such as creatine ethyl ester, creatine hydrochloride and creatine nitrate (the form found in C4) are nothing more than over-priced versions of basic creatine monohydrate.

It’s not that creatine nitrate is necessarily bad, but it’s just a more expensive form of creatine that will likely deliver the exact same effects as the basic, dirt-cheap monohydrate form.

This compound is typically used for increasing nitric oxide levels in the body in order to enhance blood flow to the muscles for improved oxygen and nutrient delivery.

However, the research on arginine AKG for this purpose is very weak, with some studies showing minor benefits at best, and just as many showing no benefits at all.

This is probably because l-argnine is very poorly absorbed in the intestines and thus a high percentage of it can’t even be utilized by the body.

In addition to this, the standard pre-workout dose for l-arginine typically falls between 3-6 grams, with Cellucor C4 only providing 1 gram per scoop.

So, arginine AKG probably isn’t even a worthwhile supplement to begin with, and even if it was, the amount included in C4 is not high enough to deliver noticeable effects even if 2 scoops were used.

Caffeine is by far the most effective performance boosting ingredient there is and costs literal pennies per serving, and this is why it’s included in virtually every single pre-workout supplement on the market.

Caffeine works by stimulating the CNS for improved energy, focus and alertness. It also delays the onset of muscle fatigue and can reduce the perception of muscular discomfort during training sessions.

The standard dosage for caffeine usually falls somewhere between 100-300mg, and at 160mg per scoop, the amount contained in C4 is fine.

This amino acid is one of the primary building blocks for important catecholamines involved in neuromuscular performance, alertness and focus: dopamine, adrenaline, noradrenaline.

L-tyrosine pairs well with caffeine and produces a synergistic effect when taken before workouts, since it increases catecholamine production while caffeine increases their release.

L-tyrosine is an effective pre-workout compound that I’ve been recommending for years, however, the big problem with C4 is that the amount included is extremely low.

You’ll notice on the C4 ingredients label that the “explosive energy blend” is based off of a proprietary blend, meaning that you’re given the total amount for all 3 ingredients combined (caffeine, l-tyrosine and tetramethyluric acid for a total of 371mg), but not the specific dosages for each one other than the caffeine.

The reason companies do this in pretty much all cases is so that they can intentionally under-dose some of the ingredients in the product without the average consumer noticing.

The ingredients in a proprietary blend are always listed from most potent to least potent, and since caffeine is listed first at 160mg, we know that the l-tyrosine must be present in an amount smaller than this.

If you want to experience significant, noticeable benefits from l-tyrosine supplementation, my recommendation is to take anywhere from 1000-3000mg depending on your individual tolerance. 500mg might produce minor effects in some people, but this would be the absolute bare minimum.

In other words, at less than 160mg, the amount of l-tyrosine included in C4 is essentially useless.

There isn’t really much to say on this ingredient, as it’s a fairly new pre-workout compound and doesn’t currently have any solid human research behind it in terms of training benefits.

In addition, since it’s listed last in the blend, the amount included would have to be even lower than the l-tyrosine and so by default would be a very small dosage. 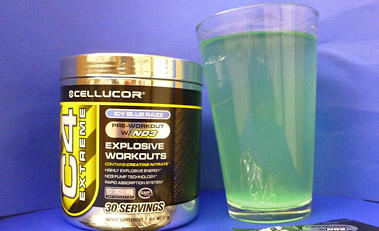 I don’t consider taste to be a very significant factor when it comes to pre-workout supplement reviews, since most companies have figured out how to effectively flavor their products these days anyway.

Besides, if you’re truly serious about your training then it’s the effects you’d want to be focusing on as long as the taste is tolerable.

In any case, the Cellucor C4 pre-workout is completely fine in this department, and the flavor I sampled (“Blue Razz”) had a nice taste and mixed up well without any issues. 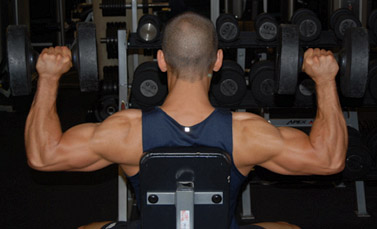 Now for the ultimate question: does C4 work?

Take a scoop or two of C4 prior to your workout and you’ll likely experience that typical “pre-workout buzz” and get a small improvement in strength, focus and overall performance as a result.

However, the primary reason for this can be summed up in one word: caffeine.

The key thing to understand here is that ANY pre-workout product that contains caffeine will give you a noticeable strength and energy boost regardless of whatever else is or is not included in the blend.

Caffeine is by far the most powerful pre-workout ingredient out there, and so any formula that includes it will always feel like it’s “working” to some degree.

However, that doesn’t necessarily mean that you need everything else included in the formula or that you need to spend $30 per bottle to get the same effect.

The reality here is that the only ingredient found in C4 that actually has direct, immediate effects on performance and that is present at a proper dose is the caffeine.

Yes, beta alanine and creatine are useful muscle building compounds as I discussed previously, however, they’re not actual “pre-workout” ingredients since they don’t have any acute effects when taken prior to training sessions.

The benefits that you get from those two supplements are a result of daily use over the long term which gradually increases the levels of each one in your body.

Once those levels have been sufficiently elevated, the benefits will automatically be present any time you train. However, there’s no specific benefit to taking them immediately pre-workout as opposed to any other time of day.

And as I already discussed, arginine AKG and tetramethyluric acid are not backed by reliable human research, and while l-tyrosine is a good pre-workout ingredient, the amount included in C4 is too small to be noticeable.

So at the end of the day, all you’re directly feeling when you slam down a scoop of Cellucor C4 prior to your workout is a quick shot of basic caffeine. 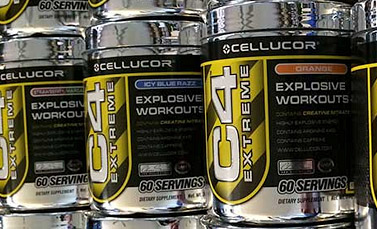 Considering the ingredients and dosages along with the price, I can’t see any good reason to run out and spend your money on the Cellucor C4 pre-workout.

All you’re really getting here is some basic caffeine along with under-dosed beta alanine, an over-priced version of creatine, under-dosed l-tyrosine and two additional ingredients (arginine AKG and tetramethyuric acid) that probably won’t have any positive effects to begin with.

Yes, you’ll hear from plenty of people out there claiming that they used C4 and that it worked well for them, but this is simply the result of the caffeine content and can easily be replicated for pennies per serving.

When you also factor in the hyped up marketing behind the product and the placebo effect, many people will way over-estimate the effects that the supplement is actually having.

If you do want to include a pre-workout blend prior to training sessions in order to maximize your strength and energy, I simply recommend that you just make your own homemade stack instead.

That way you can stick to research-backed ingredients only, include them all at their proper dosages, pay far less per serving, and customize the stack to your own individual needs.

Check out the Homemade Pre-Workout Stack video that I posted up a while back for more details on this.

You can then take your pre-workout stack and pair it up with the other basic products I recommend in my complete Fitness Supplement Guide and you’ll be all set to go.

The fancy packaging and clever marketing behind pre-workout products like Cellucor C4 certainly make them appealing to the average supplement buyer, but when you break it all down piece by piece, the reality is that they’re just not worth it in most cases.

IS 30 REPS PER SET EFFECTIVE FOR BUILDING MUSCLE?
“SHOULD I EAT BACK THE CALORIES BURNED FROM EXERCISE?”
BEST BULKING DIET TO BUILD MUSCLE? (THE SIMPLE TRUTH)
IS CARDIO NECESSARY TO LOSE FAT DURING A CUTTING PHASE?
THE “BENEFITS” OF GLUTAMINE SUPPLEMENTS DEBUNKED
LOSING STRENGTH WHILE CUTTING?
5 QUICK FIXES