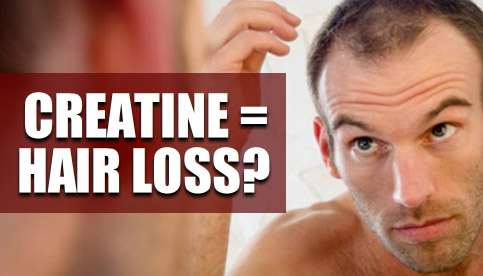 Although creatine is the most researched sports supplement in history and has been consistently shown to be both safe and effective in the short and long term, there is one potential side effect that has become a cause for concern in many trainees: hair loss.

Run a search for “creatine and hair loss” and you’ll find no shortage of posts in the bodybuilding and fitness community from apprehensive lifters unsure of whether or not they should use creatine for this reason, as well as those who even claim that creatine supplementation directly caused them to lose their hair.

But does creatine really cause baldness? Or is this just a myth?

Let’s take a look at the evidence…

Creatine And Hair Loss: A Look At The Evidence 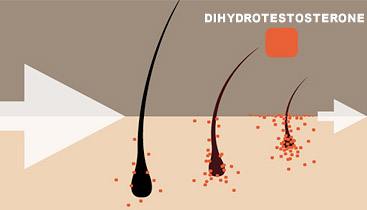 Although the cause of male pattern baldness is not yet fully understood, it does seem to be intimately linked to a compound known as DHT, or “dihydrotestosterone”.

In those who are particularly sensitive to DHT due to genetic reasons, nutrients that are important for healthy hair follicles are blocked from being absorbed, ultimately causing the follicles to shrink over time.

In 2009, a 3-week study was conducted on 20 male rugby players to investigate how creatine supplementation would affect levels of DHT in the blood. (You can view the study here)

Here’s how the creatine use was split up…

What were the results of this creatine DHT study?

The group supplementing with creatine showed a 56% increase in DHT levels after the first week of creatine loading (25g per day), with those levels dropping to 40% after the following 2 weeks of creatine maintenance (5g per day).

So, based on the results of the study it would appear fairly clear that creatine supplementation does cause a rise in DHT levels, and that since increased DHT levels contribute to hair loss, creatine should theoretically accelerate the balding process in men.

However, before you jump to any hard conclusions from this study, let me give you 7 important points to take into account…

Point #1: First off, let’s make it clear that the potential link between creatine and hair loss in men is ultimately based off of this one study alone, and the results have never been replicated.

Although the study is considered to be “statistically sound”, more research is certainly needed since varying results are found across different studies all the time.

Point #2: It’s not necessarily an increase in DHT levels itself that causes hair loss, but rather, how your body handles that DHT based on your genetics. So, even if there is a link between creatine and baldness, it would only be an issue of concern for those who are genetically prone to it in the first place.

Point #3: Since DHT levels dropped by 16% after the creatine dose was reduced for 2 weeks (from 25g daily down to 5g daily), there clearly is some sort of dose-dependent relationship at play. The study was only 3 weeks long, and it’s possible that DHT levels would have continued to drop over time.

A creatine loading phase is completely unnecessary in order to reach full saturation of the muscles (3-5g daily for 3 weeks will get you there all the same), and we simply don’t know what the results would have looked like if a lower dose was used right from the start.

Point #4: Hormone levels fluctuate quite a bit over any given 24 hour period, and it wasn’t stated whether or not DHT levels were measured at the same time every day.

Point #5: We don’t have any information about the specific training or nutrition programs that were followed, and research has shown that intense training itself can cause an increase in DHT levels. Even if the training program was not the sole cause for the increase, it still may have played a role.

Point #6: Although you’ll find quite a few forum threads from guys saying that they supplemented with creatine and experienced hair loss as a result, I would only take these reports with a grain of salt.

Given the sheer number of trainees out there who supplement with creatine and who would have been prone to hair loss no matter what, it’s obvious based on coincidence alone that some lifters would experience an apparent connection between the two.

However, always remember that correlation does not equal causation, and just because an individual supplements with creatine and notices increased hair loss does not necessarily mean it was the creatine that caused it.

Point #7: This is probably unlikely but still worth mentioning just to cover all the bases, and that is that the source of creatine used in the study wasn’t disclosed. There is always a possibility of contamination when lower quality sources are used, and this is why I always recommend that you use a creatine supplement sourced from Creapure just to be on the safe side.

Creatine And Baldness: My Overall Recommendation 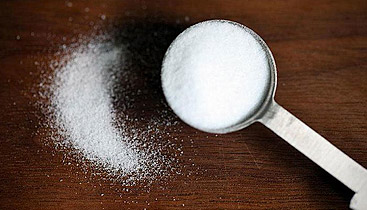 So, does creatine cause hair loss and balding in men?

The short answer is that we just don’t know.

I wish I could give a definitive guideline here, but the plain fact is that, as with many issues when it comes to fitness supplements, the answers aren’t black and white.

However, my overall advice would be this…

#1 If you currently have a strong hairline/full head of hair and early baldness does not run in your family, there’s a pretty good chance that you aren’t sensitive to DHT.

In that case, creatine supplementation really shouldn’t be an issue for concern, because even if it does cause a rise in DHT levels, it still shouldn’t lead to noticeable hair loss.

#2 – If early hair loss does run in your family and/or you are already noticing it yourself, you’ll just have to take the available evidence into account and make your own decision.

I personally don’t consider this one study to be a serious cause for alarm because of the points I mentioned above, but it’s up to you to weigh out the possibilities for yourself.

One thing I would mention though is that if you do decide to use it and want to absolutely minimize the risk, stick to a lower dose of 3 grams daily just to be on the safer side as even this creatine dosage will still allow for full saturation in most people.

WHAT IS THE BEST TESTOSTERONE BOOSTER?
DOES FASTED CARDIO BURN MORE FAT?
NOT LOSING FAT? 20 CUTTING DIET MISTAKES TO AVOID
10 ANNOYING GYM ETIQUETTE MISTAKES (DON’T BE THAT GUY)
6 UNCOMMON EXERCISES FOR A THICK, MUSCULAR BACK
HOW HEAVY SHOULD YOU LIFT? (“EGO LIFTING” VS. LIGHT WEIGHTS)