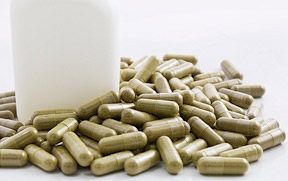 Ephedrine (otherwise known as “Ma Huang”) is a stimulating herb that grows in arid regions of the world. It has been used by the Chinese for over 5000 years to treat a variety of ailments such as asthma and hay fever.

Caffeine is an alkaloid and can be found in coffee, tea, guarana, kola nuts and cocoa beans. It is one of the most popular stimulants in the world and is consumed by millions of people every day.

Ephedrine and caffeine are often combined which eachother as a fat burning aid. This is typically referred to as an “EC stack”.

Ephedrine aids in the fat burning process by increasing the body’s levels of adrenaline and by stimulating central nervous system beta-1,2 receptors.

This in turn speeds up the body’s rate of thermogenesis (the number of calories that are burned as heat energy) and revs up energy levels as well.

On top of its effects as a stimulant and metabolism booster, ephedrine also appears to act as an appetite suppressant and as an agent that spares muscle tissue during periods of calorie restriction

Caffeine basically has the same effects as ephedrine, but accomplishes them via a different pathway by “slipping” into adenosine receptors and allowing cyclic AMP to remain active rather than being broken down.

Exactly what that means from a precise biological standpoint is beyond the scope and need of this review. Just understand that caffeine increases energy levels, mental alertness, thermogenesis and the rate of fat loss but does so using a different mechanism than ephedrine.

Is An EC Stack Useful For Fat Loss?

The vast majority of studies performed to date have shown ephedrine and caffeine mixtures to be both safe and effective for fat loss and energy enhancement.

There is such a large body of research that has been conducted on ephedrine and caffeine combinations that I won’t even bother going into the details about specific studies here.

The bottom line is that EC stack combinations do work, both according to the research and based on real-world feedback.

The most commonly used dosage is to consume caffeine and ephedrine in a ratio of 10:1, meaning that you should be ingesting 10 times as much caffeine as compared to the amount of ephedrine.

A typical dosage is 15-20mg of ephedrine coupled with 150-200mg of caffeine consumed 2-3 times daily, but this obviously varies among individuals.

If you are susceptible to the “jitters” or find that you are particularly sensitive to stimulants then you may want to consider reducing your EC stack dosage to find a level that best suits you.

It is also not recommended to take ephedrine and caffeine combinations past late afternoon as they can easily disrupt your sleep.

Another huge issue surrounding ephedrine is in regards to its safety.

Ephedrine has been portrayed in the media as a “toxic” substance that is harmful to our health and that should be avoided at all costs. I don’t know where these ideas come from, who is behind them or where they get their research from, but the reality is that these claims are quite simply false.

Virtually all of the available research on ephedrine has shown it to be both safe and effective for weight loss in healthy individuals, with no significant side effects found.

If you have pre-existing medical conditions such as high blood pressure, heart disease, heart irregularities, are pregnant or are taking MAO inhibitors, then there is a legitimate concern and ephedrine and caffeine combos should be avoided.

However, if you are an otherwise healthy individual who can tolerate stimulants and is staying within the recommend dosage, I see no problem with using these combinations as part of your supplement plan.

The Bottom Line On Ephedrine And Caffeine

Ephedrine and caffeine is an effective fat loss-specific combination to help you burn additional calories during your cutting phase.

It’s not going to perform any miracles, but when used consistently at the proper dosage it can help you shave off a couple extra pounds throughout your program.