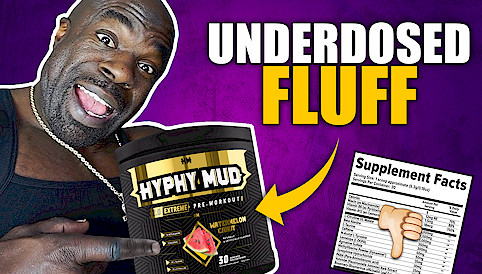 This is a science-based review of Kali Muscle’s popular pre-workout product “Hyphy Mud.”

I don’t really watch Kali Muscle’s content. It’s not my style. But I have seen a few of his videos, and “science-based” is not how I would describe them.

That’s fine. Not everyone has to take a science-based approach to training and nutrition. But when it comes to supplements, science does matter.

It’s the best way to determine the effectiveness and proper dosage of an ingredient. We can’t just rely on anecdote in this area because:

Otherwise, you don’t know if the product as a whole is worth your money or if you’re spending $40 on something with two legit ingredients and eight useless ones.

So, let’s go through and break down Hyphy Mud step by step. This shouldn’t be too hard because… well, to put it bluntly… this is one of the least scientifically sound pre-workouts I’ve seen in a while.

That’s not a personal attack against Kali Muscle. I don’t know much about him. I’m just being objective about the product based on the ingredients and dosages,

I find it important to review supplements from these big fitness channels because many of their followers buy stuff purely based on who sells it without knowing whether it’s any good.

So, let’s dive in. What follows are the ingredients found in the Hyphy Mud formula. We’ll go through each of them to see whether they are beneficial, and if so, whether they are dosed properly. 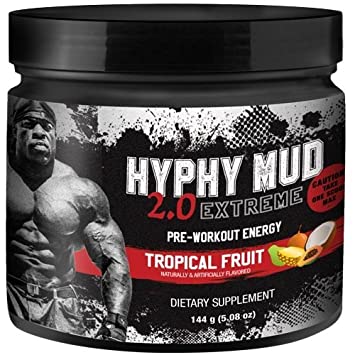 The product has 350 milligrams of caffeine per scoop. That’s a decent amount that, unless you’ve built up a tolerance to caffeine, will surely get you going.

Hyphy Mud contains caffeine in a clinically effective amount. (This is contrary to the quantities of the other ingredients found in the product, as we’ll see in a minute.)

The amount used in studies is generally between three and six milligrams per kilogram of bodyweight. That equals 225 to 450 milligrams for a 75-kilo person (165 pounds). So, Hyphy Mud does well in this regard.

Citrulline-malate is an interesting compound. It’s a combination of citrulline, a non-essential amino acid found primarily in watermelon, and malate, an organic salt of malic acid.

This combination is interesting because consuming it before your workout:

Regarding the last point, resistance training causes ammonia to build up in your bloodstream, which inhibits the ability of muscles to contract.

That’s one reason you can’t lift a heavy weight indefinitely without rest. Fatigue will build up (e.g. due to a build-up of ammonia), which disrupts energy production and muscle contractions.

Fortunately, citrulline helps your body eliminate ammonia, which is why studies show that taking it before you hit the gym can help you do more reps with a given weight.

That’s one reason I’ve included citrulline-malate in my supplement line. The issue with Kali’s product, however, is that it doesn’t have enough of the compound.

The proper clinical dose for citrulline malate is between 6-8 grams. (We’ve included six grams in our formula.) But Kali’s product only has one gram.

So, yes, citrulline-malate is an excellent ingredient. But the dosage is so small here that it won’t have real-world benefits.

Beta-alanine is another quality ingredient. It can improve exercise performance when training with higher reps by buffering acidity in muscles.

You see, when doing high-rep training, your muscles’ environment becomes more acidic. That’s due to a build-up of substances like lactic acid, which makes your muscles “burn.”

That acidity impairs muscle contractions, leading to a reduction in exercise performance. It decreases your ability to do another rep.

Beta-alanine helps you overcome this somewhat. Some studies show that this compound helps you perform better during sets lasting 60 seconds or longer.

Sounds good, right? But there are two problems. First, most people’s sets don’t last for at least 60 seconds. In that case, this compound won’t do much for your performance.

Second, Hyphy Mud only has one gram of the compound per serving, which is too low to be effective. The standard beta-alanine dose is between 3.2 and 6.4 grams.

As someone who understands supplement dosing and reads studies, I think it’s ridiculous to see the ingredient profiles on so many of these popular fitness influencer supplements.

More often than not, the dosages are highly inadequate. I mean, it only takes a ten-second Google search to find the proper dose for most ingredients.

That means the people formulating these supplements either don’t know what they’re doing, or, more likely, they do know but just decide to underdose to maximize profit. They assume that most customers don’t know the difference.

But given that you now know the truth, there’s no reason to fall for such trickery ever again.

There aren’t any exciting studies on l-taurine in regards to enhancing gym performance or body composition. And I don’t believe that one gram of the compound will do anything notable for most people.

Kali Muscle and his team don’t list any references on their sales page covering l-taurine, which isn’t surprising.

I’m a big fan of this ingredient. It works synergistically with caffeine to improve mental focus and reduce fatigue. That’s why we included 3,000 milligrams of l-tyrosine in our own product.

With Hyphy Mud, you get 300 milligrams of n-acetyl l-tyrosine. That’s a minuscule amount, and a less bioavailable form of l-tyrosine.

So, again, you’ve got a decent ingredient, but there’s not enough of it included to make a difference.

And by the way, you can check out our product PureForm here. It’s the optimal pre-workout combination that strikes the perfect balance between effectiveness and complexity.

In other words, you’ll get the most bang for your buck without over complicating things or “hyphy”-ing yourself up on a million different stimulants.

Each ingredient is based on quality scientific research with proper doses for every one of them. You can try it out here, and if you use the coupon code RSA10, you’ll get 10% off your first order.

Agmatine is a metabolite of l-arginine, an amino acid found in most protein-rich foods like fish, poultry, red meat, and dairy products.

The compound has some mixed research. Some data shows it might reduce pain perception (which can be beneficial during workouts) and regulate nitric oxide production.

Unfortunately, most of the available research is animal-based. There isn’t much human data at the moment.

Besides, the usual pre-workout dosage is between 500 to 1,000 milligrams. Once again, Hyphy Mud is under-dosed, giving you only 100 milligrams.

So, even if agmatine sulfate would be beneficial (which is questionable by itself), the quantity is too small to have an effect.

This is another energy booster. It’s supposed to reduce feelings of fatigue by preventing the neurotransmitter adenosine from binding to receptors and inhibiting dopamine reuptake.

It’s a less common ingredient that I haven’t looked super deep into. But I can tell you that the usual prescribed dose is 200 to 400 milligrams while Hyphy Mud only has a whopping 35 milligrams.

This compound works synergistically with caffeine, and also has a mild fat burning and appetite suppressing effect.

(The appetite-suppressing effects aren’t relevant for a pre-workout because exercising itself tends to reduce it already during the activity, but still.)

The standard dose is between 25 to 50 milligrams, and wow, Hyphy Mud has a proper dosage for once, giving you 30 milligrams.

Thus, synephrine HCL and caffeine are the only ingredients so far that are present in an adequate amount.

(Both caffeine and synephrine HCL are also among the cheapest ingredients to add to a product. That may say something about their motive – keeping costs as low as possible to maximize profits.)

You might have heard of yohimbine, the active ingredient found in Yohimbe. Yohimbe is the bark of the tree that this ingredient comes from, and it can improve energy levels and fat burning.

The standard dosage for yohimbine is between 5-15 milligrams. And only a few percent of Yohimbe translates to actual yohimbine. In other words, 25 milligrams of Yohimbe, the amount found in Hyphy Mud, is basically useless.

Besides, I’m not a fan of yohimbine in the first place. It can have severe side effects, especially if you’re sensitive to stimulants, suffer from anxiety, or have heart issues.

Most people should leave this stuff alone. That’s why it’s actually good that they underdosed this ingredient. (Although I’d prefer to not have it included in a product at all.)

Lastly, the product contains 10 milligrams of rosemary leaf extract. I’m not sure why they included it. But once again, the amount is way too low to matter.

To Sum This Up 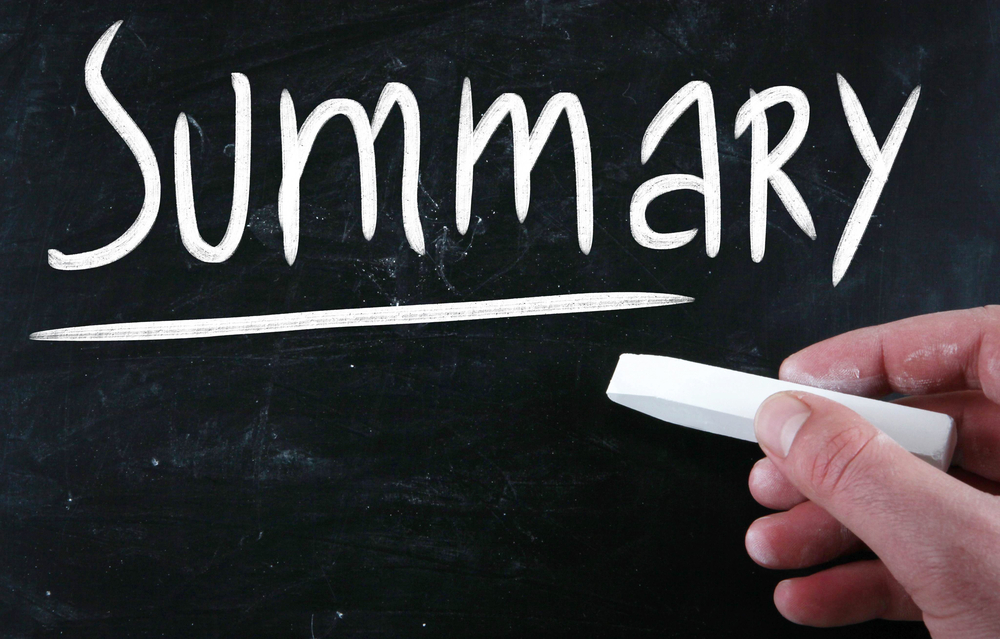 The problem? All ingredients aside from synephrine and caffeine are under-dosed. Not even slightly under-dosed, but so much so to the point of being useless.

That’s not just my opinion; it’s a fact based on objective research. Still, if you consume this pre-workout, you will get a solid energy boost, which may make you believe it’s a fantastic combo of synergistic ingredients.

In reality, it’s because the product has 350 milligrams of caffeine per scoop. That’s a pretty high amount, and as we all know, caffeine is an effective stimulant.

Caffeine can increase mental alertness, reduce the perception of fatigue, and increase strength.

So, the caffeine combined with the placebo effect will make you think Hyphy Mud is an excellent product. But in reality, you can replicate the results with a five-dollar bottle of caffeine tablets.

I’m not telling you to buy or not buy this product. That’s up to you. But, those are the facts based on the available research. You can do with that information whatever you want.

That said, if you do want to check out a legitimate, research-backed pre-workout that contains a proper blend of clinically dosed ingredients, I’d highly recommend our RealScience Athletics PureForm formula.

HOW TO TAKE CREATINE: YOUR DEFINITIVE GUIDE
THE BIG PROBLEM WITH “CHEAT DAYS” (DO THIS INSTEAD)
LOSING STRENGTH WHILE CUTTING?
5 QUICK FIXES
TRAINING EACH MUSCLE ONCE PER WEEK (EFFECTIVE OR WASTE OF TIME?)
HOW TO LOSE FAT WITHOUT LOSING MUSCLE (4 SIMPLE TIPS)
5 TIPS TO RELIEVE MUSCLE SORENESS POST WORKOUT (DOMS)