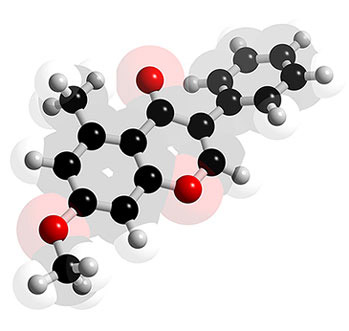 5-methyl-7-methoxy-isoflavone, otherwise known as methoxyisoflavone and “methoxy”, belongs to the flavone family, a group of compounds derived from plants. Isoflavones can be found in soy beans and other soy-containing foods.

The list of claimed effects on this one is lengthy…

Methoxy is said to:

When it first became popular in the late 1990’s, methoxyisoflavone was dubbed as the next “breakthrough miracle supplement.”

In fact, there is so much hype surrounding the effects of methoxy that supplement companies are going as far as promoting this stuff as having all of the benefits of regular anabolic steroids but without the side effects. They state that methoxyisoflavone has anabolic muscle building effects but achieves this without affecting hormone levels.

The first research on methoxyisoflavone was conducted in the late 1970’s on barnyard animals. It was shown that when methoxy was given to the animals, a 10-20% increase in overall body weight was seen.

A small amount of research was also conducted on chronically ill patients that showed minor increases in body weight as well.

Sadly, when it comes to the research, this is pretty much all that the “steroid-like effects” of methoxy are based on.

It’s almost laughable, but when you consider the amount of money that unsuspecting buyers have spent on this stuff over the years, it’s really not that funny.

As of today, there are absolutely no studies that show any correlation between methoxyisoflavone supplementation and an increase in muscle mass or strength.

The only official methoxy study conducted on humans was presented at the 2001 American College of Sports Medicine annual conference. The study examined the effects of methoxy supplementation on 14 male college students following a resistance training program. However, the study was poorly controlled (training and diet protocols were not carefully monitored) and, not surprisingly, showed no significant effects.

A lot of supplement companies will try to mislead you by presenting patent numbers in their ads, but keep in mind that a patent says absolutely nothing about the effectiveness of a product. Patent officials make no judgements on the validity of the information that is presented to support the patent, and a patent is basically nothing more than a copyright.

As for real world evidence, I don’t know of anyone who has reported any measureable gains in muscle size, strength, endurance or anything else for that matter as a direct result of methoxy supplementation.

I’m sure you’ll find forum threads here and there with people praising its effects, but these should always be taken with a grain of salt. The placebo effect is powerful enough on its own, but since most people stack multiple supplements at a time it’s often hard to narrow down exactly where the effects are coming from in the first place.

At this point I see no reason at all to include methoxy in your supplementation program. There is no science to support its effectiveness and no reason at this point to believe that it provides any benefit to bodybuilders.

It’s possible that as time goes on we may discover more about this supplement, but chances are that its “anabolic muscle building properties” are nothing more than hype.

1-2 YEARS FOR THE REST OF YOUR LIFE (KEY FITNESS MINDSET)
YES, IT’S NORMAL TO FEEL HUNGRY DURING A CUTTING PHASE (VIDEO)
MY EPIC DIRTY BULKING FAIL (30+ POUNDS OF FAT GAIN)
HOW TO “CLEAN BULK” WITHOUT GAINING FAT (2 SIMPLE STEPS)
THE #1 BEST CUTTING DIET TO LOSE FAT AND GET LEAN
THE BEST BODYBUILDING CARBS SOURCES FOR MUSCLE GROWTH