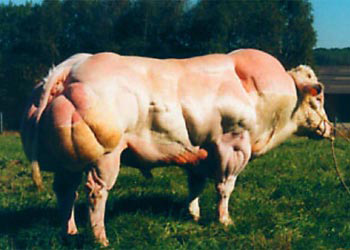 There’s no doubt that genetics play an important role in determining how quickly any given person can build muscle and transform their body.

Factors beyond our control such as muscle fiber type, muscle shape, natural testosterone levels, growth hormone levels and recovery ability are all factors that come into play.

Another genetic factor that is believed to be important is the activity of a person’s myostatin gene.

Myostatin (also known as “growth differentiating factor-8” or GDF-8 for short) is a protein encoded into the MSTN gene in humans. It’s produced primarily in skeletal muscle cells and binds to receptors in the muscle tissue.

Although its functions in adult humans are not fully understood as of yet, myostatin is believed to inhibit muscle growth in order to keep it within a certain limit.

People with mutations to the MSTN gene show significantly elevated levels of muscle mass and strength.  (Liam Hoekstra and the German “superboy” are a couple of well-known examples)

Through careful experiments, scientists determined that by “blocking” the myostatin gene in mice, the result was a dramatic increase in muscle size that otherwise would not have been possible.

Similar experiments have also been successfully performed on cattle in an effort to grow livestock with more meat and less fat.

I’m sure you can see where this is going…

This would of course remove the “limit” that myostatin imposed on trainees and allow them to make gains in muscle mass “beyond their genetic limits”.

Most myostatin inhibitors are made up of a brown seaweed extract known as “cystoseira canariensis”. It was found that when this extract was placed in a test tube it would actually bind to myostatin.

Some of the products contain additional ingredients as well, but the main ingredient in myostatin inhibitors seems to be this “magical” brown seaweed.

It sounds interesting on paper, but that’s pretty much as far as it goes.

First of all, the truth is that scientists still don’t even fully understand myostatin’s role in the muscle building process. While it does seem pretty clear that myostatin essentially codes to place limitations on muscle growth, there is not a whole lot of clear cut knowledge beyond that.

How exactly does myostatin limit muscle growth? Can we actually alter this gene in humans and see measureable results?

This still remains to be seen. And if those at the cutting edge of the research still don’t fully understand it, you can bet your last dollar that the supplement companies selling myostatin inhibitors don’t either.

In any case, if in fact we CAN affect the myostatin gene to “open up the floodgates” of muscle growth, it’s almost certain at this point that ingesting brown seaweed extract is not the way to do it.

Many supplement companies promoting their mysostatin inhibitors often use pictures of the experimental mice and cattle whose myostatin genes were altered.

What they fail to tell you is that these alterations were achieved through state-of-the-art genetic engineering techniques such as cell cloning and pre-birth gene manipulation. (No, they didn’t hand the mice a glass of water and a brown seaweed pill.)

It seems pretty clear that myostatin is an important factor in relation to the buildup of muscle mass, and as time goes on surely scientists will uncover more and more facts about this gene and how it works.

In any case, one thing remains certain: there is not a single shred of testable, empirical scientific evidence that the brown seaweed (aka. “cystoseira canariensis”) found in these over-priced “myostatin blockers” has even the slightest impact on the inhibition of the myostatin gene or that it contributes to any measureable increase in lean muscle mass or strength.

In fact, a 12 week study back in 2004 using 1200mg of a popular myostatin blocker daily concluded:

This supplement is a perfect example of how careful consumers need to be when choosing products. Just because something is written in print does not make it true.

Supplementation is a smart addition to any effective muscle building program, but should always be based on logic, reasoning and empirical research.