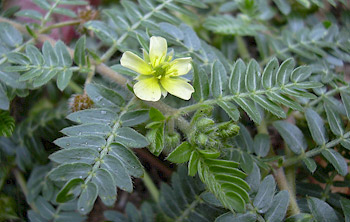 Tribulus terrestris is a flowering plant that grows in many tropical and moderate areas of the world. It’s been used for thousands of years by many different cultures to treat a variety of ailments.

As a muscle building supplement, tribulus terrestris is recognized as a testosterone booster.

Testosterone is the most important anabolic muscle building hormone in the body and is one of the limiting factors that determines how much muscle a person can gain.

Steroid users inject synthetic variants of testosterone into their bodies in order to reap the benefits that this “holy grail” of muscle growth provides.

Tribulus does not directly raise testosterone levels, but instead supposedly works by raising the body’s levels of a substance called LH (luteinizing hormone).

LH is a hormone secreted from the pituitary gland and stimulates the interstitial cells in the testes to produce testosterone.

So essentially, LH sets the production of testosterone into motion, and this would seem to have positive implications for muscle growth and workout performance.

Increases in testosterone would equate to increased muscle size, strength and recovery ability just to name a few.

So, what does the actual research say? Does tribulus work?

The fact is simple…

At this point there has yet to be a single reliable, modern study that shows a positive relationship between tribulus terrestris use and increased muscle size, strength or fat loss.

Studies that have supposedly shown this were either conducted in the Easter Bloc many years back or have never been peer-reviewed in a Western medical journal.

In fact, a few studies do exist that have shown tribulus to have no positive effects on lean body mass or performance.

A study back in 2000 using 15 subjects (using 3.21mg of tribulus terrestris per kg of body weight daily) measured body weight, body composition and strength over 8 weeks of weight training and tribulus supplementation. The study concluded:

Another study using as much as 20mg of tribulus per kg of body weight daily showed no increase in serum androgen production.

So if you’re asking “does tribulus work?” the answer at this point is probably not.

Not only do you have to increase testosterone levels, but it also has to be to a high enough level to positively affect muscle size and strength gains.

This requires upwards of several hundred to 1000+% increases in testosterone!

So, to say that a substance “boosts testosterone levels” really doesn’t mean anything in and of itself.

It’s kind of like saying that going grocery shopping increases your chances of being killed by a runaway shopping cart… it’s true, but the 0.0001% increase has no practical relevance in the real world.

Even if tribulus terrestris does increase testosterone levels (which it has never been shown to do) it’s almost certain that it is not to a high enough level to benefit bodybuilders.

The only area where tribulus may have benefit is as a libido enhancer. If you’re in an older age category and are looking for a boost in the bedroom, tribulus terrestris supplementation might be worth a shot.

Other than that, leave the tribulus on the shelf.

HOW TO LOSE FAT WITHOUT LOSING MUSCLE (4 SIMPLE TIPS)
6 TOP ARM EXERCISES FOR BIGGER BICEPS AND TRICEPS
HOW TO LOOK BIGGER AND MORE MUSCULAR IN CLOTHES (6 KEY TIPS)
THE REAL TRUTH ABOUT INTERMITTENT FASTING
DO SQUATS AND DEADLIFTS INCREASE TESTOSTERONE LEVELS?
“DOES CARDIO BURN MUSCLE AND KILL GAINS?”