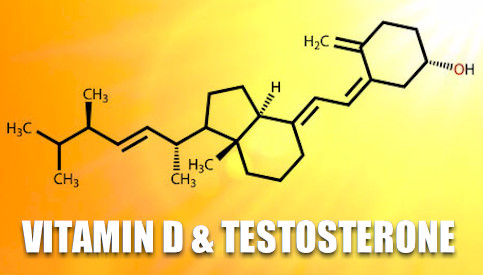 Vitamin D is important for many different functions in the body. We can get vitamin D from the sun, from food, and from supplements. Today, I’m going to break down what vitamin D is, whether vitamin D can increase testosterone levels, and finally how much you should be taking.

What Is Vitamin D?

Although vitamin D is known by most as a vitamin, it’s actually a hormone which regulates many physiological functions in the body.

If you look around, more and more people seem to be glued to their electronic devices.

As a society, we’re becoming extremely sedentary and this is one reason why we are seeing such a large abundance of vitamin D deficiency.

Vitamin D can come from food, supplements, and of course through sunlight exposure.

Vitamin D is turned into a prehormone called 25-hydroxyvitamin D (25(OH)D) through the liver (also known as calcifediol).

There are two primary forms of vitamin D:

All you need to know is that the research has made it clear vitamin D3 is superior to D2 in humans.

Examples of foods high in vitamin D are:

Although foods such as eggs and fish do have vitamin D, it’s much more efficient to get it from sun exposure and/or supplementation.

There are a number of factors which influence vitamin D absorption, including pollution, sunscreen, the complexion of your skin, the latitude of your location, your weight, age, and gut health.

Testosterone is the primary male sex hormone which is mainly produced in your testicles by Leydig cells where cholesterol is converted into testosterone.

Cholesterol is also an important precursor for other steroid hormones like vitamin D.

Testosterone is responsible for:

If you’re reading this then you probably want to increase your testosterone levels.

Having a deficiency of micronutrients such as zinc or magnesium is a surefire way to decrease testosterone levels and vitamin D doesn’t seem to be an exception.

Vitamin D plays an important role in male reproductive health, but this exact role is yet to be defined conclusively.

Research shows that Vitamin D receptors are found in testicles, which means that the male reproductive system is partially modulated by vitamin D.

Vitamin D is also important for spermatogenesis (the growth of new sperm), and there is also a positive correlation between sperm motility (ability to move) and vitamin D.

Things are looking good so far, but what does the evidence say about testosterone?

Research has shown that vitamin D supplementation increases testosterone by 30% in overweight men.

Remember how vitamin D is turned into (25(OH)D)?

Another study conducted over the course of one year looked at healthy overweight men trying to lose weight. These men had their testosterone levels tested, and were within the deficiency range for 25(OH)D on the lower end for testosterone.

The group given 3,332 IUs of vitamin D daily for the year experienced a significant increase in total testosterone and free testosterone, while no increase was found in the placebo group.

Yet some research is conflicting. This randomized controlled trial found that in healthy middle-aged men with normal total testosterone, no difference was found on total testosterone levels after a 12-week treatment of 20,000 IUs of vitamin D3 per week.

Yet one randomized placebo-controlled pilot study looking at vitamin D3 supplementation on cardiovascular risk factors and physical performance found that cortisol decreased by 40%. As you probably know, cortisol is the arch nemesis of testosterone.

There is also some weak evidence suggesting that bright light increases the release of luteinizing hormone which is responsible for increasing testosterone production in Leydig cells.

How Much Vitamin D3 Should You Take?

The recommended dietary allowance (RDA) for vitamin D will vary based on where you’re from, but generally, it will be around 600 IUs (international units) daily.

However, this doesn’t mean this dose is optimal for testosterone levels and in general this dose has been criticized by experts as being too low.

How much vitamin D should you take to maximize testosterone levels?

According to the research, maintaining serum vitamin D levels of at least 30nmol/L is good and upwards of 50nmol/L may be slightly better (study, study).

This evaluation on vitamin D aimed to find out the required amount to achieve adequate levels of 25(OH)D. Researchers concluded that 6,000 IUs daily were required to achieve 25(OH)D concentrations over 100nmol/L and even more if participants were overweight or obese (7,000-8,000 respectively).

Which vitamin D3 supplement should you use?

There are a number of factors to consider such as your age, genetics, and environment when deciding which vitamin D supplement to take and at which dosage.

To make things simple, the two key variables here are your weight and time spent in the sun. The more you weigh the more you need, and the less sun you get the more you need. I recommend this product as a good starting point.

Can you take too much vitamin D?

Despite vitamin D being good, too much vitamin D can be just as bad as a deficiency.

I want to make it clear that although 600-5,000 IUs probably won’t hurt you, as you begin to surpass this range for several months, your chances of developing hypercalcemia (excessive calcium in the blood) and kidney failure increase (study, study, study).

For the most part, the research seems clear that vitamin D is positively tied to higher testosterone levels.

Although more research needs to be done, I don’t think that it’s reasonable to expect a large increase in testosterone from supplementation if you’re already getting what your body requires.

Get in the sun on a daily basis for at least 15 minutes minimum and consider supplementation if the circumstances call for it.

Vitamin D is important for bone health, physical performance, cognitive health, sleep, etc., so it’s worth taking regardless of any association with testosterone.

THE MYTH OF “FAT BURNING FOODS”
NO MOTIVATION TO WORK OUT? HERE’S WHAT TO DO
NO SQUAT RACK? NO PROBLEM (7 BARBELL SQUAT ALTERNATIVES)
IS CARDIO NECESSARY TO LOSE FAT DURING A CUTTING PHASE?
THE REAL TRUTH ABOUT INTERMITTENT FASTING
20 COMMON BODYBUILDING MYTHS DEBUNKED