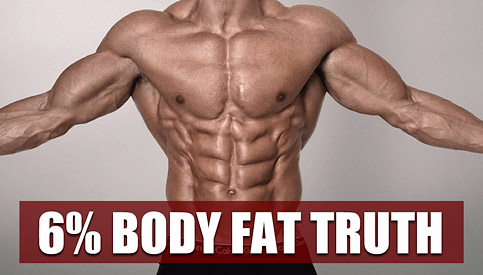 In this article, I’m going to discuss the truth about getting to 6% body fat.

How do you achieve it?

The simple answer is that you shouldn’t.

Why? Because aside from a very small percentage of genetic outliers or performance enhancing drug users, the vast majority of average, natural lifters have no business trying to maintain this body fat percentage long-term.

A natural lifter won’t be able to get this lean without experiencing significant side effects.

I know there are certain fitness “experts” out there who make this part of their marketing approach. These people promote the idea that achieving and maintaining 6 or 7% body fat is a realistic long-term goal.

Some of these “experts” claim that if someone can’t achieve and maintain this extremely low body fat percentage, then it just means that they aren’t on the right program and should buy that particular “expert’s” program.

This is not only false, but this type of misinformation is a pretty dangerous thing to promote.

The truth is that it’s just not realistic to get this lean.

Leaner is not inherently better, and promoting this idea can cause harm to fitness enthusiasts, especially beginners who don’t know any better. 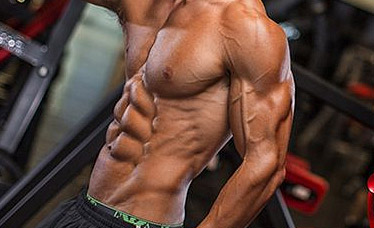 You might see pictures online of guys with a big smile on their face on Instagram with shredded abs, striated shoulders, extremely vascular with veins popping everywhere, and are 6-7% body fat.

In reality, unless they’re using performance-enhancing drugs, they probably felt like shit when that picture was taken.

If you ask most people who get that lean how they feel, they’ll likely admit that even though they look impressive, they feel terrible.

Getting this lean is a controlled form of starvation. Period.

This isn’t just a matter of “being hungrier” either.

When your body fat gets too low, you’ll also have less energy, less strength, your mood will go down, you won’t be as mentally sharp, your sex drive will tank from decreased testosterone, and you’ll probably feel more neurotic about your appearance.

In more extreme cases, at least in certain people who are predisposed to it, there can also be long term problems with things like eating disorders and body dysmorphia.

There are some valid reasons to get this lean, such as:

If you fit into one or both of these categories, or you’ve done the proper research to really understand what it is that you’re getting into, then go ahead.

However, I really don’t recommend that most people try to get this shredded. People need to stop buying into this 6% body fat hype.

Those who promote this idea should really rethink their marketing approach. Even though it might help them sell more programs, it probably does more harm than good overall.

Please keep in mind that there are always going to be genetic outliers.

There are always going those who can get really lean and stay that way without any problems. There are also some people who will take a DEXA scan and the results will show a body fat percentage that’s a lot lower than normal, even though they might not look exceptionally lean.

Varying body fat percentages can look different on different people. But keep in mind that people like this are the exception.

Unfortunately, we are often exposed to these exceptions due to social media, which normalizes extremely lean physiques and portrays them as being “healthy”. 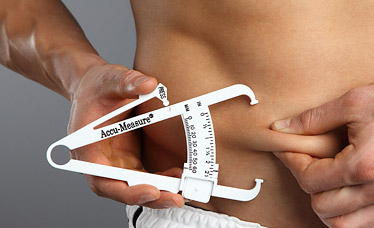 Unless someone is specifically showing you their DEXA scan results, it’s unlikely they’re actually 6% body fat. But keep in mind that even a DEXA scan isn’t always accurate.

Without a DEXA scan, any specific body fat number someone gives you really shouldn’t be trusted.

Unless you were able to physically slice your body up and measure all the different tissues individually, there’s just no way to get a perfect reading.

The truth is that most body fat percentage measuring methods have a large margin for error.

Most people significantly underestimate what their true percentage actually is.

I see guys online quoting themselves as 8% when they’re probably more like 12%. I see other guys who say they’re 14% who are literally around 20% body fat.

Take the numbers people give you with a grain of salt. In the far majority of cases, claimed body fat percentages are a rough estimate. 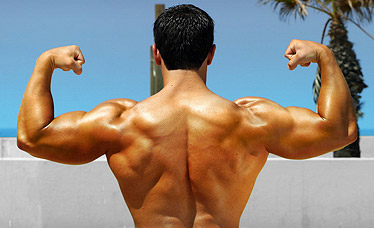 As a general rule, most guys on average will probably start running into adverse effects once they drop below 10% body fat.

Some guys can maintain 9% and be fine. Some guys could probably maintain 8% and also be fine.

But for the vast majority of guys out there, about 10% is as lean as you’d want to get for a prolonged period in order to function optimally both physically and mentally.

In terms of maximum strength and energy levels, 11-12% and above is where you want to be.

At this body fat percentage, you’re still leaner than 95%+ of the population. You’ll have a visible six-pack, strong overall muscle definition, and vascularity, all while still feeling healthy.

Anywhere within 10-20% body fat is realistic long-term and is considered to be healthy.

Where you specifically fall on this spectrum depends on your personal preference in terms of how you want to look. Some guys like that leaner aesthetic look and are willing to sacrifice some size for a lower body fat percentage.

Other guys prefer the fluffier bear mode look and are happy to maintain a higher body fat percentage so that they can look stronger and more powerful. It might also help you look bigger or more muscular in clothes.

The bottom line here is that there’s nothing wrong with wanting to have that lean aesthetic look. You can definitely do it with the right approach in place.

But it’s also important to be realistic and ensure that you’re staying healthy. 6, 7, or even 8% body fat is not a realistic body fat percentage to maintain long-term unless you’re using anabolic steroids.

You just don’t NEED to be that lean.

You probably won’t be happy being this lean anyway.

To find the proper balance between aesthetics, strength and general health, 10% and above, in most cases, is realistic and sustainable.

20 CHEAP BODYBUILDING FOODS TO BUILD MUSCLE ON A BUDGET
HOW TO LOSE FAT WITHOUT LOSING MUSCLE (4 SIMPLE TIPS)
THE BIG PROBLEM WITH “CHEAT DAYS” (DO THIS INSTEAD)
CAN’T EAT ENOUGH CALORIES TO BULK UP AND GAIN MUSCLE? (4 TIPS)
7 SIDE LATERAL RAISE MISTAKES TO AVOID FOR BIGGER SIDE DELTS
“SHOULD I EAT BACK THE CALORIES BURNED FROM EXERCISE?”