THE BEST BRACHIALIS EXERCISES AND WORKOUTS 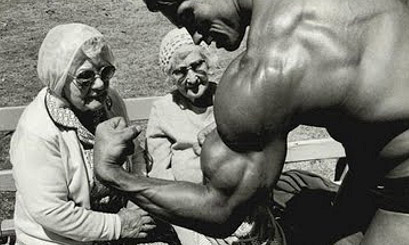 Although most lifters tend to think only in terms of “biceps and triceps” when trying to add size to their upper arms, there’s actually a third muscle involved that also plays an important role in the process.

That muscle is known as the “brachialis”, and the reason you may not be familiar with it is because it actually sits underneath the biceps and is only slightly visible on the side of the arm when the elbow is flexed. If you’re lean enough, the brachialis will appear as a circular muscle that sits in between the biceps and triceps. 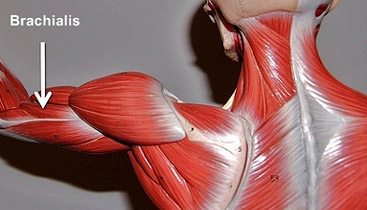 Adding size to the brachialis pushes the biceps further out, and this helps to increase your overall upper arm thickness.

But what are the very best brachialis exercises out there to build this muscle up as effectively as possible and maximize your upper arm gains? 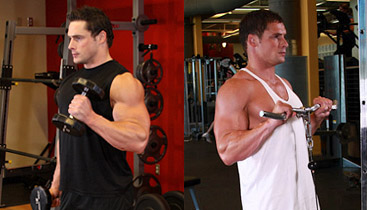 The two most common exercises that are typically recommended by most bodybuilders for this purpose are the hammer curl and reverse curl. Many lifters will include one or both of these lifts in their routine at the end of their arm workout in order to specifically target the brachialis over the biceps.

However, if you take a look at the specific functions of the muscles involved in these two exercises, you’ll see that it’s actually the brachioradialis that is being emphasized.

The brachioradialis is a thick band of muscle that runs across the top of the forearm, and whenever you perform a curling motion with your forearm in a pronated position (as in a reverse curl) or when it is midway between supination and pronation (as in a hammer curl) this is the muscle that is being targeted.

There’s certainly nothing wrong with including these exercises in your workout plan, and if you do want to specifically target your upper forearms then that’s the way to go about it. However, just keep in mind that these aren’t specifically “brachialis exercises” like most people think.

This is because the brachialis is actually the primary muscle involved in elbow flexion and is even larger and more powerful than the biceps are for this purpose. Any time you perform ANY type of curl, whether it be a basic straight bar curl, supinating curl, hammer curl or reverse curl, the brachialis will always be heavily involved in the movement and receive its fair share of stimulation. 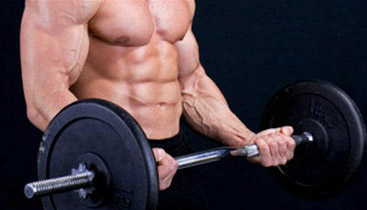 For that reason, there’s really no need to try and isolate this muscle with specific brachialis exercises or training techniques, since it’s already getting more than enough work during all of your basic curling movements as well as your compound back exercises like chin ups, pulldowns and rows.

My recommendation is to simply perform a basic straight bar curl (such as a standing barbell curl or cable curl) along with a supinating dumbbell curl, and to then throw in a hammer curl as an optional add-on.

The combination of these 2 or 3 exercises in addition to all of your basic back training will easily be enough to build up your brachialis, biceps and brachioradialis with maximum effectiveness.

8 POPULAR “FAT BURNER SUPPLEMENTS” TO LEAVE ON THE SHELF
LOSING STRENGTH WHILE CUTTING?
5 QUICK FIXES
ARE BCAA’S WORTH IT? (BRANCHED CHAIN AMINO ACIDS REVIEW)
ARE DEADLIFTS NECESSARY IN A MUSCLE BUILDING ROUTINE?
HOW TO LOSE FAT WITHOUT LOSING MUSCLE (4 SIMPLE TIPS)
THE MYTH OF “FAT BURNING FOODS”