HOW TO BUILD ROUND “3D DELTS” THAT POP (4 EXERCISES)

December 11, 2017
Sean Nalewanyj
Shoulders, Training
No Comments on HOW TO BUILD ROUND “3D DELTS” THAT POP (4 EXERCISES) 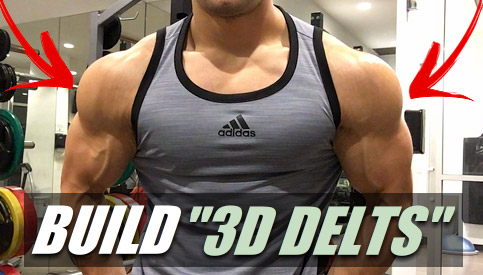 Ask most average fitness trainers out there how to build those round, wide “3D Delts” that all serious lifters strive for, and you’ll usually get the same basic answer…

They’ll tell you to put your primary focus on overhead pressing movements, since these exercises allow you to handle the heaviest weights and target the entire shoulder complex for overall mass.

While I certainly don’t discount the value of an overhead press as part of a well-balanced training plan, the reality is that it’s actually not the most important lift in your arsenal for maximizing the width and roundness of your shoulders.

In this post I’ll be going over the specific shoulder exercises you really need to be focusing on for this purpose, as well as how to perform them as effectively as possible.

The Anatomy Of Building Round “3D Delts” 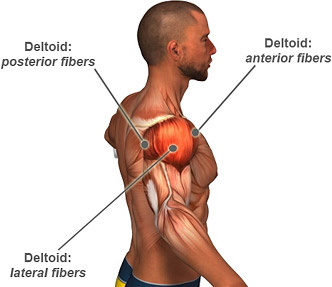 While development of the anterior head is certainly important for overall shoulder balance, it actually contributes the least to the appearance of wide, round shoulders since it sits directly in front of your body and does not “pop out” as noticeably like the other two heads do.

Although an overhead press will stimulate all three heads to some degree, its primary target is the anterior head.

You can shift a bit more emphasis onto the lateral head by using dumbbells and by lowering the weights more out to your sides, but nonetheless, the anterior head will always be taking the brunt of the load.

If you really want to build 3D delts and achieve that round “bouldered” look, your primary focus should be on developing the lateral head, with secondary focus on the posterior head. 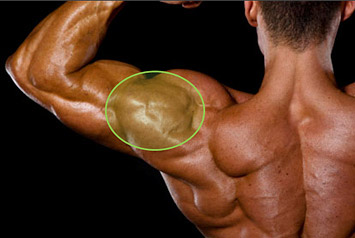 The lateral head is the slab of muscle that hangs directly off the side of your shoulders and contributes the most to that wide, powerful upper body look.

The larger the lateral head is, the rounder your delts will appear.

The posterior head also plays an important role (though not quite as significant as the lateral head) and lays directly beside the lateral head on the back side of the shoulder.

What’s the best way to go about targeting these two heads for the very best shoulder gains?

Aside from all of the indirect stimulation they’ll receive on other big compound exercises (such as overhead presses, bench presses, pull-ups, pulldowns, rows etc.) here the main movements I’d suggest focusing on along with some important form cues for each…

When it comes to effectively targeting the lateral head for bigger, rounder shoulders, a properly executed lateral raise is the main exercise you should be focusing on.

This movement can be performed using cables or dumbbells, but if possible I’d suggest using a cable since it provides a more consistent tension curve throughout the entire range of motion (dumbbells provide minimal resistance in the bottom half) and is easier on the shoulder joints as well.

Lateral raises might seem like a pretty simple exercise at first glance, but there are actually several important form cues you’ll want to apply so that other muscles don’t take over (such as the front delts, traps, lower back and rotator cuff) and that the lateral head is doing the bulk of the work.

1) Set the pulley at the very bottom of the cable machine and take one step to the side. Grab onto the attachment and hold it around upper thigh height. Place your opposite hand on your hip for support.

2) Stand with your feet shoulder width apart and with a slight bend in your knees. Lean forward slightly rather than remaining completely upright, as this shifts the line of pull away from the anterior head and more onto the lateral head.

3) Keep a small bend in your elbow and raise the cable out to your side in a circular motion until your upper arm is parallel to the floor with your palm facing down. Always keep your hands and elbows in line with each other as you raise the weight up, as bringing the hands higher than the elbows causes the rotator cuff muscles to take over.

4) Throughout the exercise, flex your abs hard and lock down your ribcage as this will shift tension off of the upper traps and more onto the shoulders.

5) Do not raise your upper arm any higher than parallel to the floor. Once you go past parallel, the tension is taken off of the lateral deltoid and the upper traps begin performing the bulk of the work.

Always favor moderate weights and strict form on this exercise. Not only will this allow you to activate the lateral head more effectively, but it will also protect your shoulder joints as well.

Trying to heave around very heavy weight using a lot of body momentum puts the rotator cuff under a lot of stress and can easily lead to injury over time.

If you don’t have access to a cable machine, you can perform dumbbell lateral raises instead.

Give both of these a try and see which one you prefer.

Face pulls are a less common, but highly effective exercise that should be included as a staple in any well rounded shoulder workout.

I also include them in my top 3 rear deltoid exercises that help with rear delt development.

Not only do they target both the lateral and rear delts for hypertrophy, but they also work the traps, rhomboids and rotator cuffs for improved upper back gains and shoulder health.

Face pulls are essentially a horizontal row, but rather than pulling the weight to your waist like you normally would, the resistance is pulled toward your face instead.

Here’s how to execute face pulls with proper form…

2) Grab onto the ends of the rope from underneath using a neutral hammer grip. Gripping the rope from on top with your palms facing down is also acceptable, but the neutral grip will allow for a greater range of motion as you pull the rope backward.

3) With your chest up, shoulders positioned down and back and scapula retracted, pull the rope towards your face while at the same time imagining that you’re trying to pull the rope apart. A good form cue here is to imagine that you’re hitting a back double bicep pose on each rep.

4) Pull the weight back until your forearms are perpendicular to the floor, squeeze your rear delts and upper back, and then return back to the starting position.

If you train from home and/or don’t have access to a cable machine with a rope, you can also perform your face pulls using resistance bands.

Rear delt flys are a direct isolation exercise that will specifically hone in on the posterior head.

As with standard lateral raises, performing these using cables will allow for more consistent tension on the shoulders in comparison to dumbbells.

Either version will still be effective, but here’s how I’d recommend performing them for the very best results…

1) Start off in a bent over position with your upper body just above parallel to the ground. Grab onto the cable using a single-hand attachment with a neutral grip.

2) To increase activation of the rear delt, let your shoulder hang forward slightly and keep your scapula flat throughout the movement rather than retracting it on each rep.

3) From there, raise the cable out to your side until you feel a strong contraction in the rear delt and then lower it back down under control.

To maximize the stimulation on the rear delts, focus on pulling the weight using your elbows rather than your hands, and emphasize strict form and control rather than loading up a bunch of weight using sloppy technique.

Or, you can also use a reverse pec deck machine if you have one available…

Lastly, if you don’t have access to cables or machines, you can simply go with a basic dumbbell variation from a seated position (just make sure to use proper rear delt raises form).

When executed properly, the upright row is a great exercise for targeting the lateral head of the shoulder as well as the traps.

The safety of upright rows is often called into question, but this is typically only a concern if you perform them incorrectly by using a straight bar and pulling the weight all the way up to your chin.

This is how most people perform upright rows, and it places a lot of stress on the shoulder joints by forcing them into a highly internally rotated and horizontally abducted position.

This can very easily lead to rotator cuff impingement over the long term, especially if you’re performing the movement using heavy weights and a lot of momentum.

For safe and effective upright rows that build your shoulders without stressing the joints, you’ll want to make these 3 key modifications to the traditional version of the exercise:

1) Pull the weight up until your elbows are at shoulder height, but no higher.

2) Rather than using a straight bar, perform the lift with dumbbells or a cable machine using a rope attachment or two single-hand attachments. This allows your wrists to fall into a more natural position.

3) Stick to lighter weights for higher, more carefully controlled reps. I wouldn’t suggest going any lower than 8 reps here, and around 10-12 will be a good range to aim for.

Here’s how the exercise should look:

I wouldn’t consider the upright row to be a “must” when it comes to building impressive shoulders, but you can treat it as an optional add-on to experiment with.

How To Build 3D Delts: Wrap Up 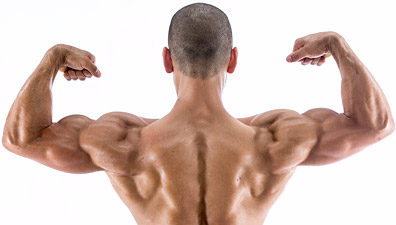 While overhead presses certainly have their value, achieving round “3D delts” primarily comes down to building up the lateral and posterior heads of the shoulder, which are better targeted using alternative movements.

To optimize your shoulder gains for that wide and “capped” look, a combination of lateral raises, face pulls and rear delt flys will get the job done, with upright rows being an additional movement you can optionally experiment with.

Genetics certainly play a role in determining just how quickly or slowly your shoulders will increase in size (and what the resulting development will look like on your frame), but anyone can build an impressive set of delts with the right approach as long as they’re patient and consistent.

Check out my article on the best exercises to build big shoulders if you want some more tips.

HOW TO “CLEAN BULK” WITHOUT GAINING FAT (2 SIMPLE STEPS)
7 SIDE LATERAL RAISE MISTAKES TO AVOID FOR BIGGER SIDE DELTS
7 BODYBUILDING SLEEP TIPS FOR BETTER REST AND RECOVERY
THE #1 BEST CUTTING DIET TO LOSE FAT AND GET LEAN
“AM I OVERTRAINING?” – 10 SIGNS YOU’RE TRAINING TOO HARD
BEST BULKING DIET TO BUILD MUSCLE? (THE SIMPLE TRUTH)