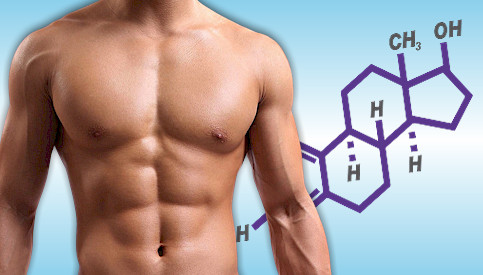 Having a high body fat percentage is bad news for men. As your body fat increases past normal ranges, your risk for disease of the heart, brain, and bones all increase dramatically.

But what does the research say about the relationship between how much fat you have and your testosterone levels?

What Is Body Fat?

Before we get started I think that it’s important to make it clear how dietary fat is different than body fat.

Body fat or “adipose tissue” is how the body stores energy over time. An excess of calories (energy) over time, whether it be from carbs, protein, or fat, leads to an increased storage in adipose fat tissue.

Two key types of fat are:

There are other types of fat such as ectopic fat (in the liver, heart, pancreas, and skeletal muscle), marrow fat, white and brown adipose tissue, etc…

To keep things simple however, visceral fat (what you can’t see) and subcutaneous fat (the stuff you hate to pinch) are the two types you’ll probably ever need to care about.

The research is conclusive that men with more body fat have less testosterone (study, study, study).

In a nutshell, more fat = more estrogen and less testosterone.

Research has shown that there is a strong association between biologically active leptin and testosterone. Low leptin levels signal to your Leydig cells in your testicles to produce less testosterone.

Dihydrotestosterone (DHT) is the most potent androgen in men. Approximately 5% of total testosterone converts into DHT through 5α-reductase.

Some men try to lower their DHT levels (usually for hair loss), but the truth is that DHT isn’t something you want to reduce.

DHT is responsible for:

Researchers in Canada looking at subcutaneous fat and abdominal fat concluded that in subcutaneous fat, a high conversion of DHT into 3β-Androstanediol (3β-diol) occurs.

Simply put, the more fat you have, the more DHT turns into the less potent 3β-diol.

The Problem With Visceral Fat

We know that increasing testosterone (even by as little as 30%) can significantly decrease visceral fat (study, study). In one study of Japanese-American men, low serum testosterone levels were a predictor of more visceral fat.

You can reduce visceral fat by:

Research has shown that bodybuilders who get very lean in their contest preparation experience a sharp decrease in testosterone. This makes sense from an evolutionary perspective.

The last thing your body wants to do in a time of famine (which bodybuilding preparation essentially is) is procreate.

Despite the visual appeal of being ripped, being very lean year round is not a good idea. I’ve touched upon this topic in my article on how to get to 6% body fat.

Keeping your body fat percentage between 8-15% is going to be great for keeping your natural testosterone levels high, as well as being a good range to bulk and cut within.

Anything over 15% or under 8% body fat is not optimal for most men long-term.

Yes, it does, but a caloric deficit (consuming less energy that you need) is necessary if you’re trying to lose body fat.

A deficit in energy is essentially a stress on the body, and so the increase in cortisol is expected.

It’s important to understand how your body reacts to small or large caloric deficits.

What’s the goal when losing fat?

The goal is to drop your calories as low as possible while retaining as much muscle as possible and not feel like crap in the process.

If you’re under 15% body fat, then a more gradual approach may be better. Your chance of losing muscle mass in a caloric deficit when you’re lean increases.

It’s worth noting that a small caloric deficit of 15% seems to have no effect on testosterone levels.

Yes, if you have a lot of body fat, you can do gradual fat loss and vice versa. The above is simply what works well for most.

Overall, the research is pretty clear that excessive body fat not only increases your risk of dying young, but also decreases testosterone levels. It’s not looking good for the fat activists out there…

There are some potential advantages to having more body fat (like having better leverages for certain exercises like the bench press), but in terms of testosterone, the cons outweigh the…well, there aren’t any pros.

“SHOULD I EAT BACK THE CALORIES BURNED FROM EXERCISE?”
LOSING STRENGTH WHILE CUTTING?
5 QUICK FIXES
NOT LOSING FAT? 20 CUTTING DIET MISTAKES TO AVOID
7 WAYS FITNESS SUPPLEMENT COMPANIES ARE RIPPING YOU OFF
THE BEST BODYBUILDING CARBS SOURCES FOR MUSCLE GROWTH
IS 30 REPS PER SET EFFECTIVE FOR BUILDING MUSCLE?