LOW BODY FAT BUT NO ABS? 3 REASONS AND HOW TO FIX THEM

August 11, 2021
Sean Nalewanyj
Cardio & Fat Loss
No Comments on LOW BODY FAT BUT NO ABS? 3 REASONS AND HOW TO FIX THEM 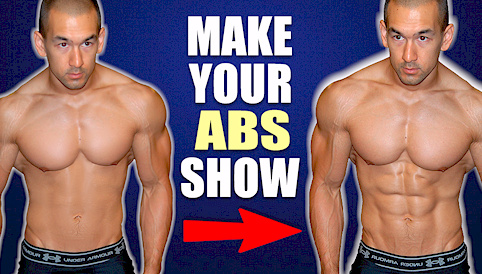 Do you currently have low body fat but no visible abs? Let’s discuss the 3 main reasons for this and how to address each one.

I get direct messages from people every day through various social media platforms looking for advice about their physique.

In the vast majority of cases where they send a physique picture along with their estimated body fat percentage, they’re usually way off by as much as 5% or more, based on how I would personally assess it.

They might say they’re 10% body fat when it’s closer to 14%, or 14% when they’re close to 20% (hardly ever do I get a message from someone that’s a true sub-10% body fat). This happens because people aren’t experienced enough to estimate body fat percentages accurately; otherwise, they rely on inaccurate measuring devices like the body fat scale at their gym or home.

Unless you’re doing DEXA scans, which is the most accurate way to measure body fat—with that even having a small margin for error—there’s no way actually to know your true body fat level. In most cases, people overestimate how lean they are. Here are three reasons why you may not have abs even though your body fat percentage is low.

Depending on your body fat distribution and how well-developed your abs are, as a male, you’re probably going to need to be down somewhere around 15% body fat at a minimum to start seeing your abs poking through.

Body fat needs to be around 10-12% for the average person to have a clear six-pack when flexing. For most guys, that’s not an easy thing to do. An actual 10-12% body fat is relatively lean, being leaner than probably 99% of the general population. It requires real discipline and proper dietary structure to get to this point and maintain it over the long term.

Suppose you think you’re sitting at a reasonably low body fat level right now, but you can’t see your abs. In that case, you may either have too much overall fat on your midsection, or you’re overestimating how lean you currently are.

From this, you need to grind through and drop some additional body fat to get to your goal.

2. No abs because of body fat distribution

The second reason why you might not have impressive-looking abs despite being at a lower body fat level has to do with body fat distribution. This is where your body preferentially stores its fat and is primarily determined by genetics.

Generally, men tend to accumulate a higher percentage of their fat around their midsection area. In contrast, women tend to store more on their lower body, but the exact degree will vary between different people.

If you’re someone who holds a higher percentage of body fat on their midsection, you’re going to need to be at an even lower body fat level than the average person to have a visible six-pack. You can’t spot-reduce fat from specific areas of your body, so the only way to lean down your midsection is to lower your overall body fat percentage as a whole.

This is something I have experienced because I store a relatively high percentage of fat on my stomach. Even at 10% body fat, I’ll still have noticeable excess fat there, with my abs never really looking that impressive, while other guys who store more fat on their legs can be sitting at 13-14% body fat and still have a flat and lean-looking set of abs.

An upside is other areas, like my shoulders, arms, and legs, always look pretty slim, with good muscle definition and vascularity even at 14 or 15% body fat. However, the downside is the extra fat that I’ll end up carrying around the midsection area.

Can you change your body fat distribution?

Unfortunately, this is something that’s mostly beyond your control, and it just comes down to weighing out the pros and cons to decide what body fat percentage suits you and your preferences the most.

I don’t have any aspirations of having a lean six-pack again because I know that to get there, I’d have to drop my overall fat percentage down to a level that I’m not comfortable sustaining, and that would detract from the rest of my physique.

A six-pack may be great, but then I’d have to sacrifice overall muscle fullness throughout the rest of my body, my strength and energy would go down, and my face would be too lean and hollow looking.

Doing all that to have abs isn’t worth the tradeoff, which is why I choose to stay around 12-14% body fat. However, everyone is different, and that’s something you’ll have to decide for yourself.

The third reason you could be sitting at a lower body fat level but not have impressive-looking abs is that you lack actual abdominal muscle development.

Having a low enough body fat percentage is the most fundamental factor in having visible abs because high body fat covers up the muscles present there, but training your ab muscles for hypertrophy is an important step.

The better developed your abs are, the more noticeably they’re going to pop out and the more visible separation there’ll be. Better-developed abs will also be more visible even at slightly higher body fat levels.

Don’t make the mistake of thinking that compound exercises like squats and deadlifts are enough to train your abs fully. While basic compound lifts provide some stimulation, it’s not going to match what you’ll get by actually training your abs directly.

Remember that the abs are a muscle just like any other, and they respond to progressive tension overload in the same way. It’s not about pumping out ultra-high rep bodyweight exercises using a simple ab training circuit until you “feel the burn”; it’s about loading the abs up with resistance within a moderate hypertrophy based rep range.

I like anywhere from about 10-15 reps for most abdominal exercises, but going slightly lower or slightly higher is fine too. Getting within a few reps of failure while using a perfect technique and striving for consistent performance increases over time are vital, so perform the same way you’d train anything else.

What are the best ab movements?

There are plenty of effective ab exercises you can perform.

A basic crunching movement should typically be the main go-to exercise since spinal flexion is the primary function of the rectus abdominis. I prefer the kneeling rope crunch, but it could also be a standard weighted crunch on a decline bench or the floor.

A machine crunch is another option as well. Besides that, leg raises are another excellent option to emphasize the lower portion of the abdominal wall, and these can either be performed via the lying or the hanging variation.

Reverse crunches are another excellent add-on, depending on how much ab training you plan to do.

While for many people getting abs is more about losing fat rather than gaining muscle, some skinny people don’t have abs because their ab muscles are underdeveloped.

Training your abs, just like any other muscle, is key to growing them and seeing progress in the mirror. A combination of low body fat (close to but above 10%) and regular ab training will help you get a more aesthetic midsection.

NOT LOSING FAT? 20 CUTTING DIET MISTAKES TO AVOID
7 WAYS TO REDUCE WATER RETENTION FOR BETTER MUSCLE DEFINITION
NO MOTIVATION TO WORK OUT? HERE’S WHAT TO DO
6 TOP ARM EXERCISES FOR BIGGER BICEPS AND TRICEPS
HUNGRY WHILE CUTTING? 12 WAYS TO REDUCE HUNGER ON A DIET
CLEAN BULKING VS. DIRTY BULKING: WHICH IS BETTER?