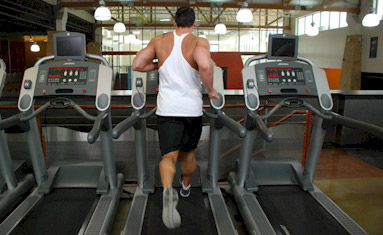 Performing cardio on an empty stomach (usually first thing in the morning after an overnight fast) has been a popular fat burning strategy among bodybuilders for many years.

It seems to make sense…

Since there is no food in the stomach, and since glycogen levels are low, the body will be forced to utilize more body fat for energy during the session. As a result, you’ll lose fat faster.

But just like the “eat protein every 3 hours” rule, the post workout shake obsession and the “eat clean 24/7” approach, fasted cardio appears to be yet another piece of traditional bodybuilding advice that comes up short.

Although this ultimately a highly complicated issue, let’s go over the key points…

First off, the body is a far more intricate and dynamic system than most of us could ever imagine. Its specific use of fuel during exercise is constantly changing and is affected by a ton of different internal factors, such as different hormones and enzymes. The attempt to burn greater amounts of fat by exercising on an empty stomach is an extremely simplistic approach to a far more complex overall picture.

Secondly, worrying about what happens in small spans of 30-60 minutes is an incredibly short-sighted view of fat loss. The process of losing fat is all about the big picture and what you do over the course of several days (not hours) is what’s really important.

Thirdly, cardio on an empty stomach doesn’t appear to burn more total fat in comparison to having a meal first.Fasted cardio does appear to increase lipolysis (the amount of fat that is broken down), but does not increase fat oxidation (the amount of fat burned). In other words, fasted cardio causes the body to break down more fat than it can actually use for energy. And when it comes to fat loss, the limiting factor is fat oxidation, NOT lipolysis. In the end, those fatty acids that aren’t used for fuel are simply re-stored as body fat.

Fourth, a pre-cardio meal increases the thermic effect of exercise. Not only does fasted cardio have minimal to no direct effect on fat loss, but fed cardio may actually be superior. This is because having a meal first appears to increase post exercise oxygen consumption (EPOC) due to an increase in thermogenesis (calories burned as heat).

Fifth, performing cardio in a fasted state reduces exercise intensity. At the end of the day, effective cardio is all about maximizing the total number of calories burned. The more total intensity you generate, the greater the calorie-burning effect will be. In most individuals, performing cardio first thing in the morning on an empty stomach will have a significant negative impact on overall exercise intensity in comparison to having a meal first.

Lastly, fasted cardio causes a greater degree of muscle loss. The research has shown that nitrogen losses are nearly doubled when cardio is performed on an empty stomach. If you’re aiming to burn fat while maintaining as much muscle as possible, fasted cardio is probably not the smartest choice.

Not only does fasted cardio appear to NOT increase fat loss during exercise, but it may actually lower the total amount of fat burned due to a decrease in post exercise oxygen consumption and overall training intensity. In addition, fasted cardio causes you to lose more muscle.

If you’re looking to maximize fat loss while minimizing muscle loss, it’s probably best to get a meal in at least a few hours prior to your cardio sessions. Fasted cardio does not produce any clear fat burning advantages, and if anything, it may be counterproductive.

ARE BCAA’S WORTH IT? (BRANCHED CHAIN AMINO ACIDS REVIEW)
“I CHEATED ON MY DIET – WHAT SHOULD I DO?”
“SHOULD I EAT BACK THE CALORIES BURNED FROM EXERCISE?”
CAN’T EAT ENOUGH CALORIES TO BULK UP AND GAIN MUSCLE? (4 TIPS)
7 WAYS FITNESS SUPPLEMENT COMPANIES ARE RIPPING YOU OFF
WHEY PROTEIN POWDER SCAM: “AMINO ACID SPIKING”