DYNAMIC DOUBLE PROGRESSION: THE MOST EFFICIENT WAY TO BUILD MUSCLE 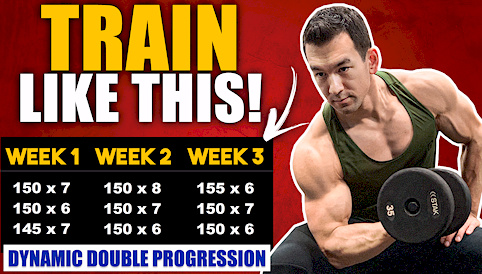 This article discusses what dynamic double progression is and how you can use it to gain strength and build muscle faster.

Some people claim it’s unnecessary to periodize your workouts, track your progress, or apply progressive overload. Keep on reading to find out why this simply isn’t true and what to do instead.

What Is Dynamic Double Progression?

Many online training plans—perhaps some of the ones that you’ve already bought as well—usually just tell you to do just something basic like “three sets of ten reps” per exercise.

This is not very helpful because it doesn’t give you a structured plan on how to move forward with that program and progress from week to week in the most efficient way, which is critical for gaining muscle.

The underlying driver of muscle growth is progressive overload. Basically, to trigger gains, you’ll have to expose your body to a stimulus you aren’t used to.

The best way to apply progressive overload is by gradually increasing the amount of weight that you lift. In other words, you want to focus on getting stronger.

If you accomplish that, you will gain muscle over time. But if you fail to increase the amount of resistance, there won’t be a stimulus to grow, and thus you won’t make progress.

While these are all effective in their own right, based on my own experience and coaching hundreds of clients, dynamic double progression is the most effective.

It’s the best way to approach workouts for the typical everyday lifter who wants to gain muscle, get strong, and have a top 1-2% physique but isn’t competing or trying to get to an elite level.

If that describes you, then you don’t need anything fancy. You can make excellent progress and build most of the muscle you’re ever going to develop using this one model alone.

This is how I’ve personally trained for most of my lifting career. It’s how I started training at the age of 13 in my parent’s basement. Yes, with my trusty set of sand filled Walmart weight plates.

And while I’ve played around with a variety of different approaches over the years, this is the one I always come back to because it’s very effective and reliable.

How Does The Basic Double Progression Model Work? 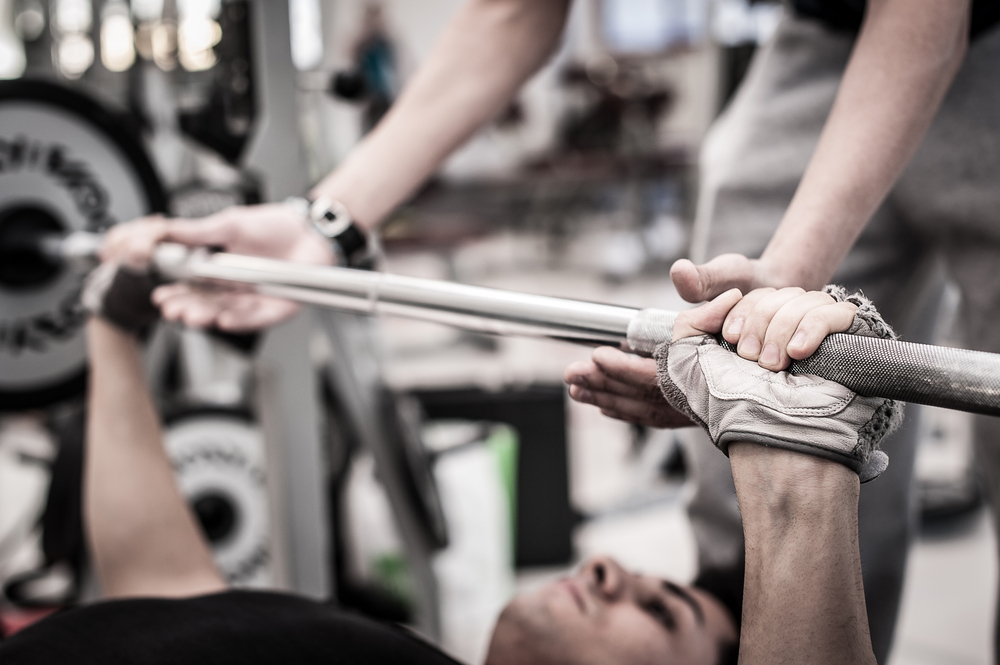 It’s simple. You adjust two different variables as you progress through your training: weight and reps. And you do this while holding onto a given rep range.

Let’s use the 8-10 rep range as an example here and say that you’re doing three sets of squats.

Your goal would be to work up to hitting the upper end of the rep range across all three sets. Once you’ve reached that target, you’ll increase the weight and start over.

For instance, let’s say that your performance on the squat with 220 pounds is as follows for week 1 of your program:

Then, you try to improve on those numbers in the next workout until you can do three sets of ten reps with the same weight of 220 pounds.

For example, in week 2’s workout, you might be able to do ten reps, ten reps, then nine reps:

And then in week 3’s workout, you can hit ten reps, ten reps, then ten reps.

In that case, you would increase the weight in the week 4’s workout. As a result, you likely can’t do ten reps on all three sets anymore. You would have to work back up to doing three sets of ten in the same way that you did before by making small improvements every time you hit the gym (I used weeks here just as an example).

The double progression approach is pretty straightforward, and it does work well.

How Does The Dynamic Double Progression Model Work?

The idea is the same as with the basic double progression model except that you don’t have to hit the upper end of your rep range across all three sets before raising the weight.

Instead, you’re going to focus on your performance on the first set (this is where “rating of perceived exertion,” or RPE, comes into play). Once you’ve hit the upper end of the rep range (e.g., you did ten reps when working in an 8-10 range), you’ll increase the resistance.

Then, for your other sets, give it your all while staying one to two reps away from failure. (That’s an RPE of 8-9 for reference.)

With dynamic double progression, you don’t worry about how many reps you do on the second, third, and fourth set (or however many sets you do after the first one). Instead, your first set is what gets all your attention. That’s the one you try to improve on week after week.

Which is Better, the Basic or the Dynamic Double Progression Model?

Both approaches are effective, although my preference goes toward the dynamic double progression model. That model will likely cause you to gain muscle and strength faster.

With the dynamic model, you’ll keep the relative effort level the same across all sets. But with the basic model, you might drop the effort on the first or second (or even the third set).

Relatively speaking, those earlier sets might become easier the more you’ve progressed with a particular weight. This will result in a slightly lower stimulus compared to what you would get with the dynamic model.

The relative effort level on the first set (or first few sets) in the basic model will drop from week to week as you wait for the subsequent sets to catch up in reps.

With dynamic double progression, however, you’re maintaining the same effort level across all sets. That means you can challenge yourself harder and better see how strength is progressing on every set. This is why I prefer the dynamic model. 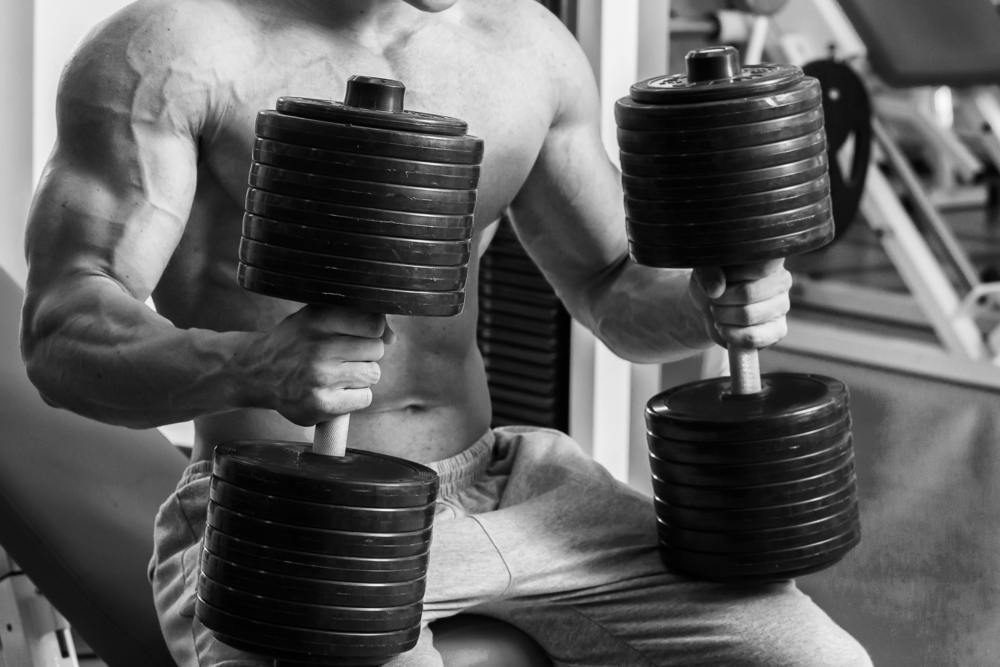 Technically, you could use whatever rep range you want. But, I generally like to use rep ranges that have a gap of two reps. Examples are 5-7 reps, 6-8 reps, or 8-10 reps.

When you do increase the weight (whether it’s 5 to 10 pounds on a compound lift or 2.5 to 5 pounds on an isolation movement), usually you’ll lose about two reps with each increase. That’s not always the case, but it’s a good general guideline.

It is okay to use larger gaps. But, if you hold onto a rep range of, let’s say, 6-10 reps per set, you’ll likely have to increase the weight more upon reaching the ten reps than by the numbers outlined above.

That way, you can still ensure that you’ll end up around six reps on your first set when you step in the gym the next time.

Also, keep in mind that it’s not the end of the world if you misjudge things and end up outside your targeted rep range. It’s okay if you occasionally do slightly fewer or more reps than your target.

Just use that as a learning moment so that you can get better at altering the weights over time. It might require a little bit of practice, but you’ll get used to it quickly.

It’s both simple and highly effective. So, give it a try, and feel free to let others know how you’re progressing with it in the comments below.

CLEAN BULKING VS. DIRTY BULKING: WHICH IS BETTER?
ARE BCAA’S WORTH IT? (BRANCHED CHAIN AMINO ACIDS REVIEW)
HOW TO PERFORM CARDIO WHILE BULKING & BUILDING MUSCLE
HOW TO LOSE CHEST FAT AND GET RID OF “MAN BOOBS”
5 TIPS TO RELIEVE MUSCLE SORENESS POST WORKOUT (DOMS)
WHY A “HEALTHY DIET” IS NOT ENOUGH FOR REAL MUSCLE GROWTH & FAT LOSS