June 6, 2022
Sean Nalewanyj
General Training, Training
No Comments on HOW TO DO “MYO REPS” TO BUILD MUSCLE IN HALF THE TIME 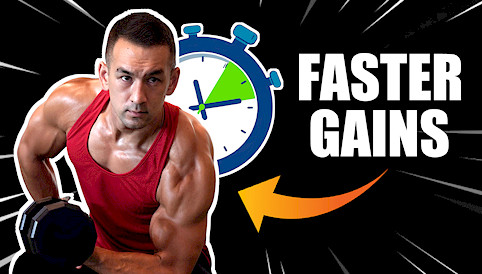 How To Build Muscle In HALF The Time (TRY THIS 1 TECHNIQUE!)

In this article, I’ll be outlining one particular hypertrophy training method that you can use to build muscle effectively in a much more time and energy efficient way. This technique is called myo reps.

So let’s go over what myo reps are, why they’re effective, how to implement them the right way, and who specifically should use them.

What is a Myo Rep Set? 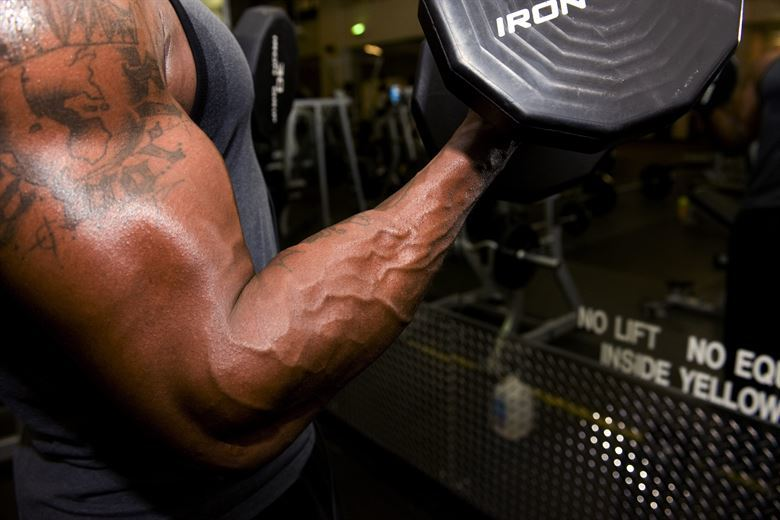 You then repeat that for 4-5 of these additional low rep mini-sets.

Why Do Myo Reps Work?

Like we’ve discussed before on the subject of training effort, it’s crucial to understand that only the last few reps of a given set are responsible for triggering significant muscle growth. These are the reps when you’re up close to the point of muscular failure.

Those last few really difficult, uncomfortable reps are the reps that actually challenge the existing capacity of the muscle.

I’ve discussed this in more detail in my article on dynamic double progression. This is where you focus on your performance on the first set (where “rating of perceived exertion,” or RPE, comes into play). Once you’ve hit the upper end of the rep range (e.g., you did ten reps when working in an 8-10 range), you’ll increase the resistance. You then try to improve on that first set’s performance from week to week.

Now, with the myo rep set, the easier reps early on don’t give your body any incentive to change because the muscle already has more than enough resources to complete those reps. That’s why they’re easy.

Only when you threaten the existing limits of the muscle is when your body says, “okay, this is a real threat. We need to make some adaptations here to deal with this.” Those last few stimulative reps are usually referred to as “effective reps,” whereas the non-stimulative reps that come before are sometimes referred to as “junk reps.” 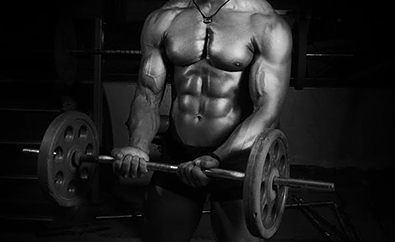 The whole point of the “junk reps” is to eventually get to the effective reps.

So, the idea behind myo reps is that you’re maximizing the efficiency of your training by reducing the number of junk reps you’re performing. Instead, you are just focusing on those high quality muscle building reps near the point of failure.

Now you’ll find slightly different myo rep variations in terms of the exact rep ranges , rest periods, and set counts, but I’ll give you the general framework below.

How To Perform a Myo Rep Set 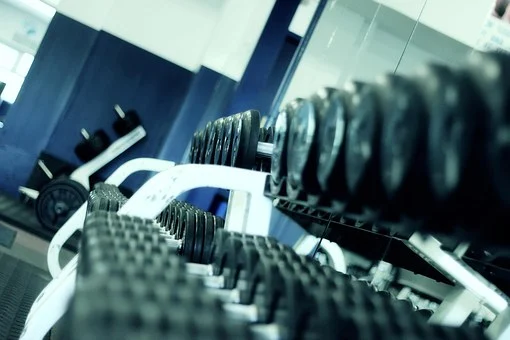 First, you’re going to start off with an initial “activation set.”

Now don’t get the wrong idea based on the terminology. “Activation set” almost sounds like it’s a warmup, but this initial set is far from it. Treat this set just like you would any other normal muscle building set.

You don’t necessarily have to go all the way to failure, although you can if you want to. But as a general rule of thumb, just perform this set using whatever intensity level you’re aiming for based on your own training approach.

Whether that means all the way to failure, or 1-2 reps in reserve, use your best judgment. You should also keep the rep range for that initial set slightly higher, usually about 12-20 reps.

I think a lot of times, people end up stopping the set not because they’re truly close to mechanical muscular failure. Instead, they stop because the general discomfort level gets too high in terms of muscle burn and cardiovascular stress (and even mental stress).

So, I personally like to keep it on the lower end. If you prefer higher reps, then go for it. But I still recommend around 12-20 reps should be the standard for the initial set.

After that initial set, you take a short rest. The usual recommendation is 3-5 deep breaths or around 10-15 seconds. The precise rest period is not some critical factor. But, the main thing is to just try to keep it consistent each time. That way, you can properly track your progress if you are using myo reps consistently.

After that short rest, you pick the weight back up and perform your first mini-set, which are typically between 3-5 reps. Take another rest, do another 3-5 reps, and repeat that until you’ve performed 4-5 of those mini sets.

With this approach, you’re condensing a very high number of effective reps down into a shorter period. As a result, you’re optimizing the stimulus to fatigue ratio because you’re performing way fewer junk reps.

Take the following scenario as an example. Say you perform 5 sets of 10 reps. You’d be getting 50 total reps in and yielding maybe 15 or so effective reps. This is assuming you’re getting about 3 per set. But if you do, say, a 12 rep initial set, followed by 4 mini sets of 3 reps, you’d be getting the same total number of effective reps, but only doing 24 reps in total. This scenario, albeit a rough example, would be twice as efficient.

The exact numbers in terms of reps and rest periods is not what’s most important here. But the general, overall approach of a higher rep set, followed by several lower rep sets with shorter rests in between, is important since you’re reaching failure each time.

At the end of the day, you’re performing a large number of effective reps within a smaller window.

Test it out yourself and see what you prefer most in terms of the rep range on the activation set, the rest period, and the rep counts on the mini sets. As long as you have that overall framework in place, that’s what truly matters.

You can be even more efficient with this.

Keep in mind that you don’t even necessarily have to do a high rep activation set. One method I personally use sometimes is what I would call a “myo rep drop set.” Here, you can use a heavier weight for the initial set at a slightly lower rep range, then just lighten the weight a bit for the additional mini sets.

Again, I personally prefer training in more moderate rep ranges. So, what I might do is perform the initial set in the 6-8 rep range with a heavier weight, take a short rest, and then do the additional mini sets for 3-5 reps each using a slightly lighter weight.

Why Would You Use Myo Reps In the First Place? 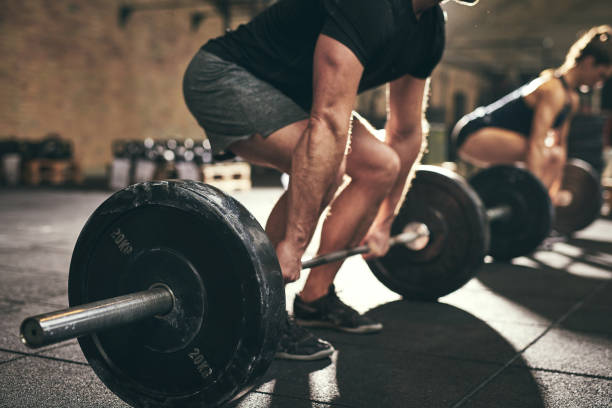 The first and most obvious reason is that myo rep sets are more time efficient.

Depending on your current situation, if for some reason you need to get in and out of the gym more quickly, then obviously myo reps would be useful for you.

Myo reps don’t have to be all-or-nothing. They’re something you can mix in here and there to make your training more efficient.

Aside from efficiency, myo reps can be more beneficial for you if there’s a certain muscle group you want to bring up. These are the muscle groups you probably want to increase the overall volume for. Instead of doing 6 extra weekly sets for something like your upper traps, you could do 1 myo rep set and get a similar training effect.

Myo reps could also be helpful if you’re in a situation where you don’t have access to heavier weights. Let’s say you only have enough resistance where you need to be doing 25 reps per set to get close to failure. Instead, you could do your initial set for 25 reps, take your quick rest, and then crank out a bunch of those lower rep mini sets in the myo rep fashion. That way, you’re getting all those effective reps without having to completely reset and do another 25 reps each time.

If you’ve got a minor injury that you’re trying to work around, myo reps could also be applicable there. Say you’ve got a slight issue with your lower back, and the only way to work around it is by doing lighter weight leg presses for high reps. If you don’t want to do a bunch of sets that will fatigue the hell out of you, you can do the initial lighter set for higher reps, and then do the rest of your sets myo rep style. That way you’re still lifting that lighter weight, but you’re getting to failure more efficiently.

Beyond all those things, you could also just do myo reps because you enjoy them. If you prefer doing myo reps instead of straight sets, there’s really nothing wrong with that either.

In all, there are a lot of potential benefits with this method. I’s definitely something to consider if you fit into any of these categories. I’ve used myo reps in my own training and have found them effective for these very reasons.

Who Should (and When to) Use Myo Reps? 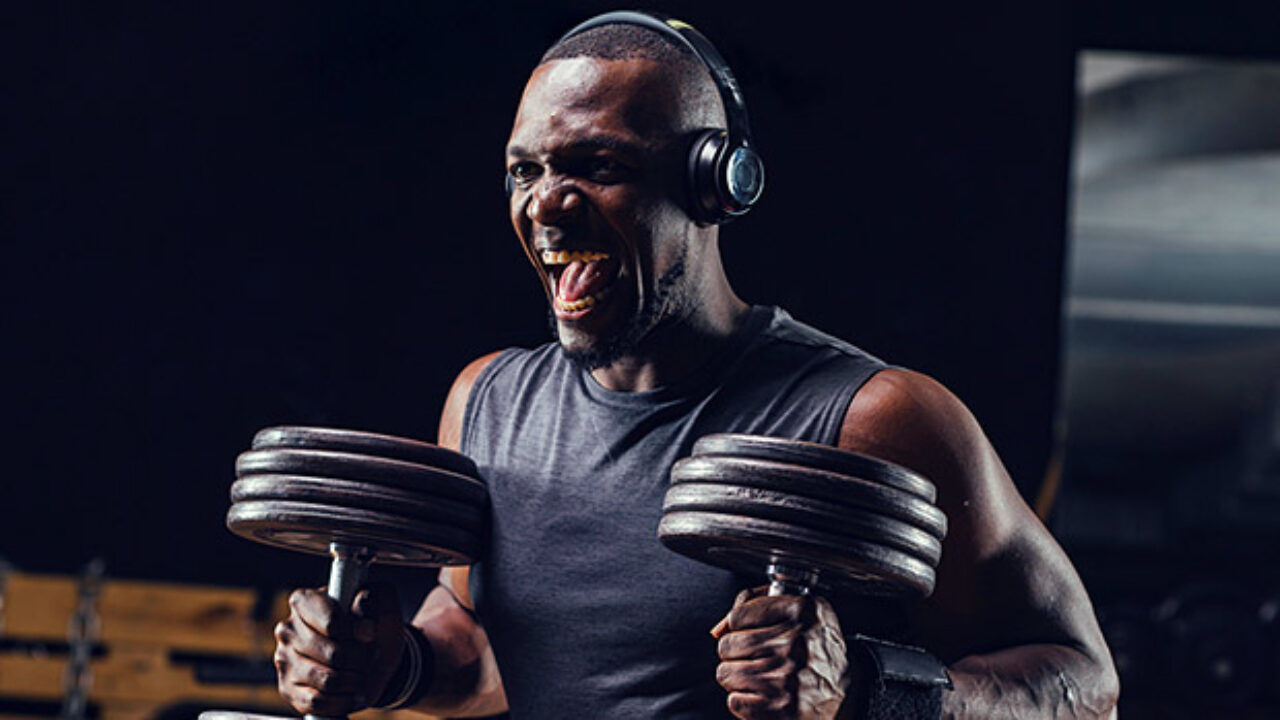 One final point I wish to make: myo reps are probably more of an intermediate and beyond type of technique.

I like to see novices build up their overall base using more traditional methods. I always recommend they start with basic free weight exercises using regular straight sets, and then branching out from there.

Technically, you could do myo reps as a novice if you implement it properly and you know what you’re doing. But overall, I’d say it’s more geared to those with some reasonable lifting experience under their belt.

Also, you probably want to be doing this on mechanically simpler exercises. I wouldn’t recommend doing myo rep squats, standard or Romanian deadlifts, or free weight dumbbell presses where you have to kick the weights into position. You can still use myo reps on compound exercises, but try not to go all the way to failure. Choose movements where there’s less margin for error and where it’s easy to get into position.

I do think, though, that any isolation movement is fine to use myo reps with.

Here are the main points we covered in this article:

Overall, this isn’t a technique you must use. I’m not recommending that you go and replace all your straight sets with myo reps. But depending on your current situation, your goals, and your preferences, it’s definitely a viable option in the toolbox to consider.

“BRO SPLIT” ROUTINES: ARE THEY EFFECTIVE FOR BUILDING MUSCLE?
WHEY PROTEIN POWDER SCAM: “AMINO ACID SPIKING”
HOW LONG DOES IT TAKE TO LOSE MUSCLE AFTER A GYM LAYOFF?
5 BODYBUILDING DIET TIPS TO HELP YOU STAY CONSISTENT
DO SQUATS AND DEADLIFTS INCREASE TESTOSTERONE LEVELS?
“AM I OVERTRAINING?” – 10 SIGNS YOU’RE TRAINING TOO HARD