THE BEST WAY TO DO INCLINE FLYS FOR UPPER CHEST GAINS

October 12, 2015
Sean Nalewanyj
Chest, Training
No Comments on THE BEST WAY TO DO INCLINE FLYS FOR UPPER CHEST GAINS 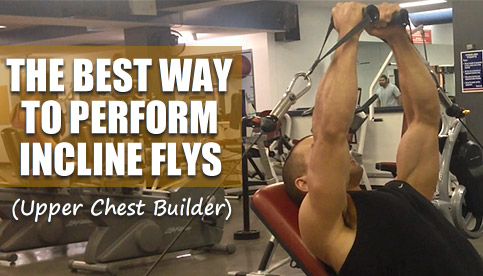 When it comes to targeting the upper pecs for increased size and thickness, incline flys are a great finishing movement to include after all of your basic compound pressing exercises have been completed.

Yes, there is such a thing as the “upper chest”, as the pec major is actually comprised of two separate heads with their own unique fiber angles and nerve innervations: the “lower sternocostal fibers” and the “upper clavicular fibers”. 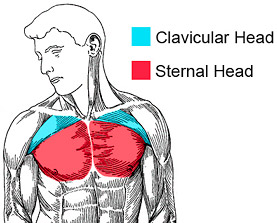 Incline presses and incline flys place the angle of the resistance properly in line with those upper clavicular fibers to add more size and thickness to the upper area of the chest.

Incline dumbbell flys are the most common variation in this category, and although they are still effective in their own right, the downside is the loss of tension on the pecs that occurs toward the top half of the range of motion.

Since the dumbbells rely only on the straight-line force of gravity, the resistance ends up pulling straight down rather than out to the sides, resulting in minimal pec activation in the fully contracted position. 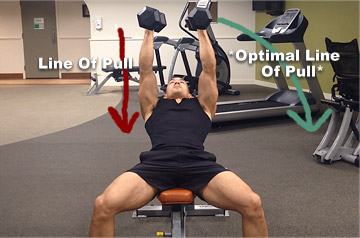 This is why incline cable flys are the superior choice, as they allow you to maintain constant pec tension from the bottom all the way up to the top.

Standing incline cable flys are another common variation you’ll see, and although they do hit the upper chest from the proper angle, the front delts become a prime mover in the exercise due to the “low to high” motion that the resistance is pulled in. 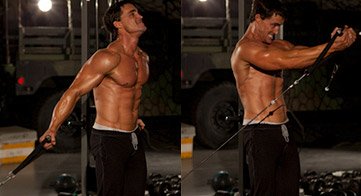 As you can see, this variation is basically a combination of both an incline chest fly and a front raise.

The best way to perform an incline chest fly is to actually wheel a bench in between a cable stand, and then perform them from a lying position.

This way you get the constant tension of the cables combined with the proper positioning to maximize pec activation throughout the entire exercise.

Simply place a bench in between a cable stand ensuring equal space on both sides, and adjust it to a 30-45 degree angle.

Grab onto both handles, lay down on the bench and then perform your incline flys in the same way you normally would with dumbbells.

That means keeping a slight bend in the elbows, pressing the cables up in a circular arching motion until the handles touch, and then lowering them back down until your upper arms are parallel to the floor.

Rather than just trying to “jam your hands together”, really focus on driving the weight upward using your elbows and upper arms.

Remember that the function of the pecs is to bring the humerus across the front of the body (known as “horizontal adduction”), and a useful form cue I like is to “forget” about my hands and forearms and simply do all of the pressing from my elbows up.

Give this incline chest fly variation a try and see what you think. You’re really going to feel this one firing up your pecs nicely, especially at the very top of the movement as the force of the cables tries to pull your arms apart.

Incline dumbbell flys are still a fine option if that’s all you have available, but I would definitely recommend giving this incline cable fly exercise a try if you do have the equipment for it.

20 LOW CALORIE SAUCES TO ADD FLAVOR TO YOUR FOODS
HOW TO BUILD ROUND “3D DELTS” THAT POP (4 EXERCISES)
DO SQUATS AND DEADLIFTS INCREASE TESTOSTERONE LEVELS?
WHY A “HEALTHY DIET” IS NOT ENOUGH FOR REAL MUSCLE GROWTH & FAT LOSS
HOW TO “CLEAN BULK” WITHOUT GAINING FAT (2 SIMPLE STEPS)
THE BIG PROBLEM WITH “CHEAT DAYS” (DO THIS INSTEAD)