When it comes to “honing in” on specific parts of a given muscle, the pecs are without question the one area that people seem to be most interested in.

Every day I wake up to questions on my Facebook Page and YouTube Channel asking me what the best ways are to specifically target the inner, outer, upper and lower pecs, with most lifters believing they possess some glaring chest imbalance that needs to be immediately corrected.

In most cases, those who feel that a specific area of their chest is “lagging behind” are simply lacking overall chest development as a whole.

If you’re still a beginner then this is almost certainly the case, and all you should really be focusing on right now is adding more mass to your entire chest in general. With a bit of time and patience, those supposed “weak points” will automatically fill out on their own.

That said, if you truly are lacking in lower pec mass and have a legitimate weak point there that you want to bring up, there are specific chest exercises you can use to get a focused lower pec workout and balance things out.

Doing so is actually pretty straightforward and is a simple matter of modifying the angle at which you perform your pressing and fly exercises.

In order to maximize the tension on any given set of muscle fibers, you’ll want to place the “line of pull” of the resistance directly in line with the direction that those fibers run.

If you take a quick look at the anatomy of the pec major, you’ll see that the fibers that make up the lower portion of the chest run diagonally at around a 30-45 degree angle upward toward the outer side of the body.

In order to place the resistance directly across those fibers and get the most effective lower pec workout possible, decline exercises are where you’ll need to place your focus.

Now keep in mind that any time you perform any basic pressing exercise or fly motion, your entire pec muscle will be activated to a degree, and it’s actually not possible to specifically “isolate” the lower chest without also training the middle and upper regions at the same time.

Using a decline angle will shift the emphasis onto the lower chest area so that it ends up performing more of the work, but you’ll still be training your entire chest at the same time regardless.

So, which specific lower pec exercises should you select, and how should you arrange them into a proper lower pec workout?

Well, even though the pecs are generally considered to be a “large” muscle group, the truth is that they’re actually not that big in comparison to other major muscles, and there’s no need to over-complicate things here or include a million different variations to get a good lower pec workout.

At the end of the day, any combination of a basic decline press and decline fly will be highly effective as long as sufficient intensity, volume and frequency are in place.

That said, in order to achieve the fastest and more efficient results possible, here are my top 2 recommendations when it comes to lower chest exercises…

It’s no secret that I’m a big fan of dumbbells over barbells when it comes to compound free weight pressing movements for building chest mass.

Dumbbells increase pec activation by providing a larger range of motion, they allow you to work iso-laterally to prevent size and strength imbalances, and they’re easier on the shoulder joints as well due to the more natural arching movement.

The proper form here is the same as any other basic dumbbell press, except that you’ll be performing the exercise on a decline bench angled at roughly 30 degrees and with your legs and feet hooked under the pads.

* Keep your elbows slightly tucked at about a 20-30 degree angle to your torso rather than flaring them out at 90 degrees like most people do. This will reduce the stress on your shoulder joints.

* Focus on pushing the weight through your elbows rather than your hands. This will shift a bit more emphasis onto the chest and away from the shoulders and triceps.

What about decline barbell presses?

If possible I would recommend using dumbbells on this movement for the reasons listed above. However, if for some reason you can’t perform decline dumbbell presses, or if you really just prefer to use a barbell, then it’s still an acceptable option.

It’s not that barbell presses are bad; I just don’t consider them to be the very best choice available. However, they’ll still be an effective lower pec exercise when performed consistently and with proper form.

Lastly, if your gym has a decline machine press available (such as a decline hammer press), that can also be optionally used as well.

After performing your compound decline pressing exercise, you can finish off your lower pec workout with an isolated fly exercise to train the chest through a different movement pattern while getting in some additional volume.

A decline dumbbell fly is an acceptable choice, but since dumbbells gradually take tension off the pecs toward the top half of the exercise, my suggestion is to use cables instead if you have them available.

The most practical way to perform a decline cable fly is from a standing position in between a cable stand. These are usually referred to as “cable crossovers”…

The key here is to make sure that you position the cables high up on the machine and then press them downward from a high-to-low angle.

As discussed earlier, this angle will line up the resistance with the direction that the lower pec fibers run in order to increase their activation during the lift.

Make sure to place one foot forward for improved balance/stability, keep a slight bend in your elbows, and then press the cables in a downward fly motion as if you were trying to wrap your arms around a large column.

Really focus on squeezing the chest as you reach that fully contracted position, and emphasize control on this exercise rather than the faster and more explosive motion you’ll be using on your compound presses.

However, for some people it may not be practical to move a decline bench around the gym in this way, in which case the standing variation will be the easier option.

Why No Wide-Grip Dips? 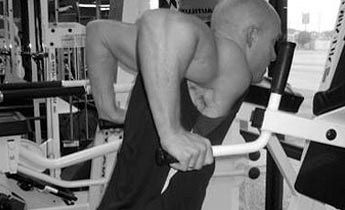 Although wide grip dips are usually considered as a staple lower chest exercise, it’s not a lift that I generally recommend using if you already have standard presses and flys available.

Dips primarily involve flexion of the shoulder and extension of the elbow (rather than adduction of the humerus), which means that for most lifters they end up being more of a front delt/tricep focused exercise.

Sure, they will still train the pecs with a reasonable degree of effectiveness, but given that they also place the shoulder joint into an awkward position and are easily the most dangerous chest pressing exercise you can perform, I just don’t see how the risk/reward justifies it given that a pressing/fly combination will easily be enough to max out your chest gains anyway.

If you do feel that you can safely perform wide-grip dips and want to continue including them in your workouts then by all means go ahead, but if you come back 2-3 years down the line with a nagging shoulder or elbow injury, don’t say I didn’t warn you.

My advice is to simply select 1 decline pressing exercise and 1 decline fly exercise, performing 3-4 sets of each.

This is just one way of doing it though, and if for whatever reason you decide to use some of the other exercise variations I mentioned then the routine would obviously look different.

The main idea though is to just make sure that you include 1 decline press and 1 decline fly exercise, train them using proper form, and focus on gradually increasing the weight and reps from week to week.

If you’re looking to really target the lower chest with as much stimulation as possible, you can optionally add in a third exercise as well.

There’s no single “perfect” lower pec workout, and you can play around with it depending on how “far behind” your lower chest is and how much volume you can safely handle.

As always, if you need any help with this then feel free to ask and I’ll be happy to give you some feedback.

NOT GAINING STRENGTH IN THE GYM? (12 SIMPLE FIXES)
6 UNCOMMON EXERCISES FOR A THICK, MUSCULAR BACK
ARE BCAA’S WORTH IT? (BRANCHED CHAIN AMINO ACIDS REVIEW)
THE “REFEED DAY”: HOW STRATEGIC OVEREATING CAN IMPROVE FAT LOSS
10 SIMPLE WAYS TO INCREASE TESTOSTERONE LEVELS NATURALLY
HOW LONG TO REST BETWEEN SETS TO BUILD MUSCLE & GAIN STRENGTH