ONE ARM BIGGER THAN THE OTHER? HOW TO FIX AN ARM IMBALANCE

August 9, 2012
Sean Nalewanyj
Arms, Training
No Comments on ONE ARM BIGGER THAN THE OTHER? HOW TO FIX AN ARM IMBALANCE 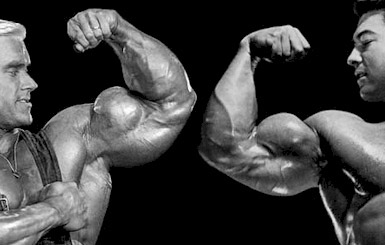 Got one arm bigger than the other?

This is pretty common and anyone who trains with weights will tend to have one side of their body that is dominant over the other to some degree.

But if one side of your body is starting to take over and become significantly bigger/stronger than the other (whether it’s a bicep, tricep or even one side of your chest or lats), I’ll show you how to fix it in 2 simple steps…

Step #1
Switch to exercises that allow each side of your body to move independently. 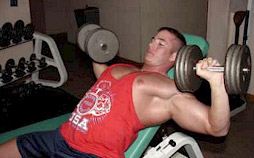 When you perform barbell exercises or machine lifts where both arms work together to move the weight, one arm will always have the chance to cheat for the other.

The body is incredibly smart, and it’s always trying to find the most efficient way to keep that bar moving. Whether it’s a barbell bench press, military press or barbell curl, that dominant side can often end up taking the brunt of the load.

So, if one side of your body has become so dominant that it’s affecting your ability to perform your exercises properly… OR it’s become so much bigger that you feel annoyed every time you secretly flex in the mirror, put all your focus on unilateral movements.

Step #2
Focus on taking the weaker arm to muscular failure, but don’t perform ANY additional reps with the stronger arm. 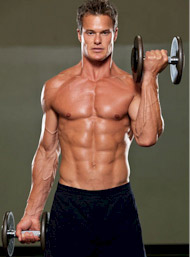 Let’s use an alternating dumbbell curl as an example, assuming your left arm is the weaker side…

You’d start by curling the dumbbell with your left hand for your first rep. Then you’d perform your second rep with the stronger arm. You’d continue alternating back and forth. As soon as your weaker arm hits muscular failure, you’d match that rep with your stronger side and then stop the set.

By following this method, the weaker arm gets greater stimulation by going all the way to failure, while the stronger arm stop shorts of failure. This basically allows you to maintain the size/strength in your dominant side while allowing the weaker side to catch up.

A common misconception is the idea that you should actually perform additional sets for the weaker arm.

Logically this makes no sense. If doing 3 extra sets allows a particular muscle to grow faster, the implication is that all along you could have been performing those 3 extra sets and growing faster.

In reality, more volume does not necessarily mean more growth. You can only stimulate so much muscle growth in a given workout, and there is a finite volume limit whereby any additional work won’t produce additional gains.

My point here is that the only way to correct an imbalance like this is to ease off of the stronger side with lower intensity while maintaining your regular maximum intensity on the weaker side. But training both sides with equal intensity and then adding more sets to “super charge” the weaker side doesn’t make any sense.

One Arm Bigger Than The Other: Quick Review

– Switch entirely to unilateral movements.
– Focus on taking the weaker side to muscular failure, and then perform the same number of reps with the stronger side, but nothing more.

Follow this method consistently and the weaker side will gradually catch up until the imbalance is no longer noticeable.

ARE DEADLIFTS NECESSARY IN A MUSCLE BUILDING ROUTINE?
HOW LONG TO REST BETWEEN SETS TO BUILD MUSCLE & GAIN STRENGTH
NOT GAINING STRENGTH IN THE GYM? (12 SIMPLE FIXES)
CAN’T EAT ENOUGH CALORIES TO BULK UP AND GAIN MUSCLE? (4 TIPS)
“SHOULD I EAT BACK THE CALORIES BURNED FROM EXERCISE?”
THE BEST TIME OF DAY TO WORKOUT FOR MAXIMUM RESULTS