OVERHAND PULL UPS VS. UNDERHAND CHIN UPS FOR THE LATS

June 10, 2014
Sean Nalewanyj
Back, Training
No Comments on OVERHAND PULL UPS VS. UNDERHAND CHIN UPS FOR THE LATS 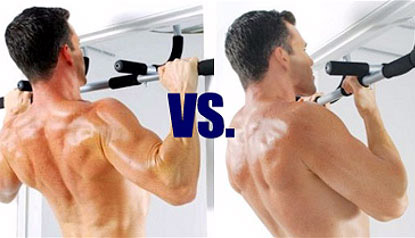 Pull ups and/or chin ups are universally considered as one of the very best foundational exercises to include in any basic routine aimed at building overall muscle size and strength.

They effectively hammer both the lats and biceps, and also provide decent stimulation to the rear delts and the other muscles of the mid/upper back.

As long as you have access to a pull up bar of some sort, I’d definitely recommend including a pull up or chin up exercise in your back training routine.

Before we get started, let’s quickly clarify the basic difference in form between the two…

Pull-Ups: These are performed using an overhand grip spaced slightly outside of shoulder width, palms facing away from you… 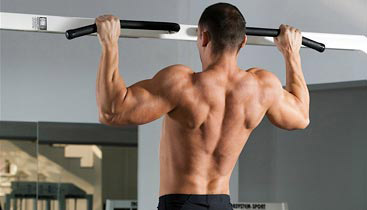 Chin-Ups: These are performed using an underhand grip spaced shoulder width apart, palms facing towards you… 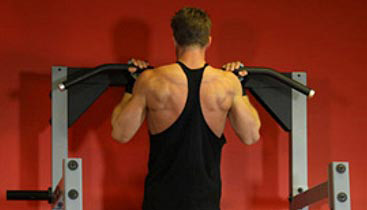 The question is, which variation should you choose and why?

(It should also be noted that all of the information outlined in this article also applies to overhand/wider grip lat pulldowns versus underhand/closer-grip lat pulldowns, as these exercises mimic the same basic movement pattern as pullups and chin ups)

When it all comes down to it, there really are only two major differences you need to be aware of here from a basic muscle building perspective…

#1 – Each exercise targets the lats from a slightly different angle.

The difference is not going to be anything too significant, but it should be noted that each exercise does stimulate the lats in a slightly different way.

#2 – Underhand chin-ups shift a bit more emphasis onto the biceps relative to the lats in comparison to overhand pull ups.

Although both movement patterns will always hit both the lats and the biceps no matter what, the primary goal of each exercise should still be to achieve maximum lat stimulation.

However, if you’ve developed a strong mind-muscle connection and are able to initiate the underhand variation with your lats while focusing on pulling through your elbows rather than your hands, the difference isn’t going to be overly significant.

Overhand Pull-Ups Vs. Underhand Chin-Ups: Which Should You Choose?

If I was forced to choose one, I would definitely go with overhand pull ups in favor of underhand chin ups for the simple reason that they do stimulate the lats to a slightly greater degree.

However, it certainly doesn’t have to be one or the other here. Both exercises are still very effective and have their own unique lat-stimulating benefits, and there’s no reason why you can’t simply include a mixture of the two.

There are 3 main ways you can go about this…

First off, you could utilize both movements as part of the same workout.

If you do go with this option, I would generally recommend performing your overhand variation first so that you don’t pre-fatigue your biceps on your underhand movement.

Thirdly, you could simply cycle back and forth.

There’s no one absolute “best” method here and it really comes down to your individual preference and training structure.

Also note that you don’t even necessarily have to include both variations in your plan.

Some variety will likely be optimal in terms of achieving 100% of your potential growth over the long term, but as long as you’re applying progressive overload to some form of vertical pulling (whether it be overhand pull ups, overhand lat pulldowns, underhand chin ups or underhand pulldowns) and you’re combining it with some sort of rowing movement, you’re still going to experience near-maximum lat gains regardless.

So, if one variation clearly feels more effective for you (or if a particular version causes joint discomfort), then feel free to just stick with the one you prefer.

1-2 YEARS FOR THE REST OF YOUR LIFE (KEY FITNESS MINDSET)
YES, IT’S NORMAL TO FEEL HUNGRY DURING A CUTTING PHASE (VIDEO)
MY EPIC DIRTY BULKING FAIL (30+ POUNDS OF FAT GAIN)
THE “REFEED DAY”: HOW STRATEGIC OVEREATING CAN IMPROVE FAT LOSS
NOT LOSING FAT? 20 CUTTING DIET MISTAKES TO AVOID
THE BEST LAT EXERCISE TO BUILD A WIDE BACK: “LAT PULL INS”