January 20, 2015
Sean Nalewanyj
Back, Training
No Comments on PROPER PULL UP FORM: 5 KEY MISTAKES TO AVOID 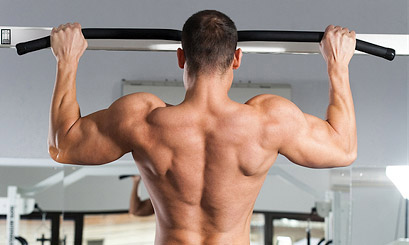 Good old fashioned pull ups are the oldest and most widely used back exercise known to man and are a highly effective means of stimulating size and strength gains in the lats for a wider and thicker back.

You grip a bar overhead, pull yourself up until your chin clears, lower yourself back down, and repeat.

Although it may seem dead-simple at first glance, the reality is that most lifters in the gym actually make quite a few basic errors on this exercise that reduce its overall effectiveness and even increase the chances for injury as well.

Sure, even an incorrectly performed pull up will still produce decent results, but if you really want to maximize the stimulation and growth of your lats while building your pull up strength as effectively as possible, make sure to avoid these 5 common mistakes.

You can either watch the video below for a live demonstration of these tips, or read the text version below…

Pull Up Form Mistake #1
Excessive Use Of Momentum.

Swinging the legs, torso, and chin forward and back to gain momentum first before pulling with the arms (also known as “kipping”)…

Raising the knees toward the chest on the way up…

If you’re still working on your pull up strength and are simply unable to perform them under strict control at the moment, then safely using a bit of momentum at the start is fine until you progress further.

However, if you do have the strength right now to perform controlled, momentum-free pull ups with at least your body weight, then stop worrying about how much weight you can strap to your waist or how many reps you can perform and just do them the right way first and foremost. (In other words, don’t be an “ego lifter.”)

That means pulling yourself in a straight up and down motion without swinging your legs or upper body and without raising your knees out in front of you… pausing very briefly in the fully contracted top position… and then lowering yourself under strict control for a good 2-4 second negative before pulling yourself back up again.

Using excessive momentum might make your numbers look good on paper, but all it really does is bring other surrounding muscles into the equation other than your lats, and in some cases also increases your risk for injury as well.

If you want to get the very most out of your pull ups, cranking out quick “half reps” where your chin doesn’t even come close to the bar on the positive portion and your arms are nowhere near fully extended on the negative portion is not the best way to go about it.

The basic goal of any exercise that you perform in the gym is to safely take the targeted muscle from a fully lengthened position to a fully shortened one in order to get the deepest stretch and the strongest growth-stimulating contraction possible.

In order to accomplish this, you must train using a full range of motion on every lift.

When it comes to proper pull up form, that means raising yourself up until your chin is just over the bar (or very close to it), and lowering yourself down just short of fully extending your arms.

I don’t recommend dropping yourself into a dead-hang as this can place unnecessary stress on the shoulders, especially if you’re using added resistance.

Pull Up Form Mistake #3
Elbows Too Far In Front Of Body.

When you perform your pull ups with your elbows too far out in front of your body, you end up taking a good portion of the stress off of your lats and shifting it onto your biceps, brachialis, and forearm muscles instead.

In order to hit your lats as effectively as possible, focus on keeping your elbows pointed out to your sides and more in line with your shoulders. Then, as you pull yourself up, drive those elbows down and back as if you were trying to shove them into your back pockets.

This one simple form shift will ensure that your lats are performing the bulk of the work rather than your arm flexors and forearms.

Pull Up Form Mistake #4
Internal Rotation Of The Shoulders.

Again, the goal when performing a pull up is to place as much tension on the lats as possible, and when you internally rotate your shoulders and shrug them upward toward the top half of the movement, all you’re doing is placing unnecessary stress on your rotator cuff, traps, and other surrounding muscles while minimizing the lat-stimulating effects of the exercise.

Instead, right from the bottom position of the very first rep, actively pull your shoulders down and back (and keep them there for the remainder of the set), and then lead with your chest as you pull yourself up.

Practice this one and get it nailed down and you’ll notice an immediate improvement in how well you’re able to “feel it” in your lats any time you perform your pull ups.

Pull Up Form Mistake #5
Pulling With Hands Rather Than Elbows.

This one is more of an added tip rather than a blatant mistake, but as with any pulling exercise that you perform for your back, you should always focus on pulling the resistance using your elbows rather than your hands.

Just imagine that your hands and forearms don’t even exist (or that they’re merely “hooks” that are attaching you to the bar), and then instead of thinking about pulling your body upwards toward the bar, focus on driving your elbows down toward the floor instead.

The lats are one of the trickiest muscles on the body to really develop a strong mind-muscle connection to, and “pulling with the elbows” is one of the best training cues out there for minimizing stress on the forearms and arm flexors and maximizing the stress on the lats. 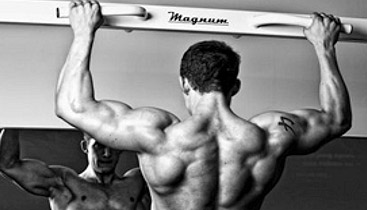 So, here’s a quick recap of all the tips we covered in this article when it comes to proper pull up technique…

* Perform every pull up under strict control with minimal use of momentum. That means keeping your upper body and legs stationary and pulling yourself upward in a straight line, followed by a controlled 2-4 second negative.

* Always use a full range of motion by pulling yourself up until your chin is just over the bar or very close to it, and lowering yourself until your arms are just short of being fully extended.

* Keep your elbows pointed out to the sides and in line with your shoulders, and then focus on driving them down and back on each rep.

* Keep your shoulders down and back at all times and lead with your chest on the positive portion of each rep.

* Focus on pulling the resistance using your elbows rather than your hands.

Pull ups are one of the best lat exercises in existence, but only if they’re done properly.

If you want to get the very most out of this movement and build up your lat size and strength as efficiently as possible, make sure to employ all of the tips we just covered and I guarantee you’ll notice a marked improvement during your back workouts.

SHOULD YOU DO CARDIO BEFORE OR AFTER WEIGHTS?
10 ANNOYING GYM ETIQUETTE MISTAKES (DON’T BE THAT GUY)
“I CHEATED ON MY DIET – WHAT SHOULD I DO?”
THE BEST CARDIO EXERCISES TO BURN FAT AND GET LEAN
ARE DEADLIFTS NECESSARY IN A MUSCLE BUILDING ROUTINE?
HOW TO “MINI CUT” AND LOSE EXCESS FAT DURING A BULK