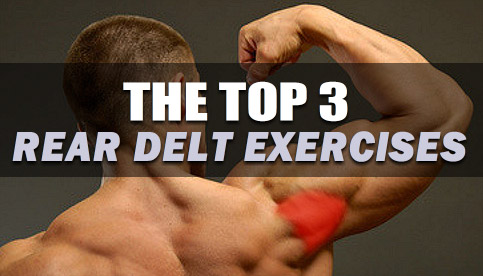 Most lifters spend plenty of time hammering their front and side delts through heavy chest pressing, shoulder pressing, front raises and side lateral raises, but end up heavily neglecting their rear deltoids in the process.

This has two main consequences…

1) You end up limiting the total amount of shoulder size and strength you can develop, since you’re under-training one of the three heads that make up this complete muscle group.

2) Just as importantly, you increase your chances for shoulder injury. When you place a larger amount of focus on building up the pecs and front delts in comparison to the upper back and rear delts (as nearly everyone in the gym trying to build muscle does without even realizing it), you end up creating an imbalance in the shoulder joint as it begins to “roll forward” and out of proper positioning.

In a nutshell, this creates instability in the joint which can set you up for a whole host of issues over the long run, from rotator cuff injuries to shoulder impingement to elbow problems.

If you want to develop a rounder, more muscular set of shoulders while improving your posture and decreasing injury risk at the same time, some direct rear deltoid exercises should definitely be included as part of your training plan.

Although the rear delts will receive some decent stimulation during rowing exercises for your back, you’ll still want to include some additional rear delt isolation exercises for optimal size and strength development.

What is the best way to go about training them?

Well, keep in mind that we’re actually dealing with a pretty small muscle group here, so there’s no need to perform an endless number of different exercises and variations in order to get an effective rear delt workout.

Although there are many different options out there to choose from when it comes to effective rear delt training, here are the top 3 lifts I recommend making use of… 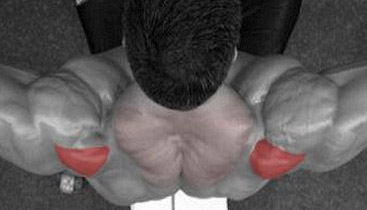 Face pulls are a very uncommon, but hugely effective exercise that should be included as a staple in any well rounded training routine.

Not only are they one of the best rear deltoid exercises you can perform, but they also stimulate your traps, rhomboids, and other upper back muscles to help counteract that anterior/posterior imbalance I mentioned earlier.

These are basically a horizontal row, but instead of pulling to the chest or waist like you would on most back exercises, the resistance is pulled toward the face.

Here’s how to execute face pulls with proper form…

2) Grab onto the ends of the rope from underneath using a neutral hammer grip. Most people perform this exercise by gripping the rope from the top with the palms facing down, but the variation I outline here allows for a larger range of motion and greater external rotation of the shoulders as you pull the rope backward.

3) With your chest up, shoulders down and back, scapula retracted and head stationary, pull the rope toward your face while at the same time imagining that you’re trying to pull the rope apart. A good cue is to imagine that you were hitting a back double bicep pose on each rep.

4) Squeeze your rear delts and upper back, and then return back to the starting position.

If you train from home and/or don’t have access to a cable machine with a rope, you can also perform your face pulls using resistance bands or with dumbbells on an incline bench.

This is a direct isolation exercise that will train the rear delts effectively with minimal involvement from other muscle groups.

Although it can be performed using dumbbells, I would suggest going with the cable variation if possible since it places the rear deltoids under constant tension throughout the entire exercise, whereas dumbbells provide minimal to no resistance in the lower half of the range.

Either version will still be effective, but for the very best results you’ll want to use cables here.

1) Start off in a bent over position with your upper body just above parallel to the ground. Grab onto the cable using a single-hand attachment with a neutral grip.

2) Next, allow your shoulder to hang forward slightly and keep your scapula flat rather than retracted. This directs more of the tension off of the upper back and straight onto the rear delt. There’s nothing wrong with involving the muscles of the upper back, but with this particular exercise we want to focus on pure rear deltoid isolation.

3) From there, while focusing on pulling through your elbow rather than your hand, and while emphasizing control rather than just heaving up the weight, raise the cable out to your side until you feel a strong contraction in the rear delt. Lower the weight under control and repeat.

Another possible variation of this exercise is to perform it in a standing position in between a cable stand and using both arms at the same time. Watch the clip from the video below for a visual demonstration.

Or, you can also experiment with another option that uses the same basic movement pattern by performing your rear lateral raises using a reverse pec deck machine if you have one available…

Lastly, if you don’t have access to cables, then you can simply go with a basic seated bent over rear lateral dumbbell raise using the same basic form…

Although a bent over rear lateral raise and face pull are my top two picks and will usually be sufficient on their own, you can also incorporate a third exercise into your plan if really want to hone in on that rear deltoid and upper back area even further.

That exercise is a rear delt dumbbell row, which is very similar to a basic one-arm dumbbell row for the lats except with a couple of important modifications…

1) Setup a flat bench and place one knee up on the bench with the other foot planted firmly on the ground.

2) Using the opposite arm for support, grab a dumbbell using an overhand grip and, instead of tucking your arm in toward your side as you would for a traditional dumbbell row, flare it outward so that your upper arm is perpendicular to your body.

3) With your torso parallel to the ground or just slightly higher, row the dumbbell up toward your chest while focusing on squeezing your rear delt in the process. Lower the weight down and repeat.

Although I do prefer the one arm dumbbell variation since it allows you to keep your lower back supported and work each arm independently, rear delt rows can also be done in a standing position using a barbell as well…

Or, if you have a machine row available that allows you to perform the exercise with your upper arm perpendicular to your body and row the weight up to your chest, that can optionally be used as well.

Again, there are many different exercises and variations out there can be used to get in an effective rear delt workout, but these 3 are my top recommended choices.

Structuring a complete rear delt routine using these lifts is very straightforward, and my suggestion is to just select two exercises and perform 3 sets of 8-10 reps for each, 1-2 times per week.

You can perform more volume than this if you’d like, but keep in mind that that the rear delts are a small muscle group and that they’re also stimulated during all of your basic compound pulling movements for your back.

Rear delt training works well when included as part of a complete shoulder workout, or it can be performed at the end of a back workout.

Although most lifters in the gym over-look this muscle group as part of their programs, including some focused rear deltoid exercises is a great way to build up a rounder, thicker set of shoulders while also improving shoulder joint health at the same time.

HOW TO RETURN TO THE GYM AFTER A TRAINING LAYOFF
1 COMMON MUSCLE BUILDING NUTRITION MISTAKE TO AVOID
THE MYTH OF “FAT BURNING FOODS”
THE REAL TRUTH ABOUT INTERMITTENT FASTING
“I CHEATED ON MY DIET – WHAT SHOULD I DO?”
IS 30 REPS PER SET EFFECTIVE FOR BUILDING MUSCLE?