7 SIDE LATERAL RAISE MISTAKES TO AVOID FOR BIGGER SIDE DELTS 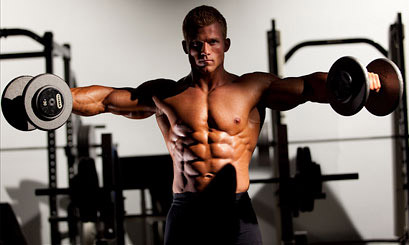 Lateral raise mistakes are a dime a dozen around the gym, but that doesn’t mean you have to remain stuck there.

If you’re looking to carve out a set of round, broad shoulders that really stand out and get noticed, a properly executed side lateral raise is a key exercise in your training arsenal.

This is because side lateral raises target that often hard-to-hit lateral head of the shoulder (also referred to as the “side delts”), which is the most important of the 3 shoulder heads to develop if you really want to maximize your overall delt width and thickness.

Although a side lateral raise might seem like a very basic movement on the surface, the truth is that most lifters make a ton of key errors on this exercise that greatly reduce its muscle building effectiveness and increase its injury-risk potential at the same time.

In this post I’m going to outline the 7 biggest lateral raise mistakes that I see people making in the gym, along with easy-to-follow tips to correct them.

7 Side Lateral Raise Mistakes To Avoid

(You can either watch the following video for a live demonstration of these tips, or just check out the written descriptions below)

This should go without saying, but I’m continually surprised at how many people make this one basic but crucial mistake when performing this exercise.

If you’re using an amount of weight on this lift that requires you to swing your upper body back and forth and heave the weights around in an uncontrolled manner, all you’re really doing is reducing the stimulation of the side delts and increasing your chances of shoulder injury at the same time.

Remember, it’s not the objective amount of weight that you lift that matters; the only thing the lateral head of your shoulder (or any other muscle on your body for that matter) experiences and responds to is the direct amount of tension that it’s placed under.

So, check your ego at the door (if I had a dime for every person at your gym who cares how much you can side lateral raise… I would have zero dimes) and always make sure to execute your side laterals using a light enough weight so that you can perform the exercise under strict control with minimal use of momentum, and with full focus on maximizing the tension on the side delts.

Rather than standing with your upper body completely upright throughout the exercise (or even worse, with your body leaning back), instead, keep a small bend in your knees and lean slightly forward instead.

Standing too far upright shifts the line of pull onto the anterior head of the shoulder (the front) and reduces the activation of the side delts.

Side Lateral Raise Mistake #3
Raising The Weights Out In Front Of Your Body Rather Than To The Sides.

Remember, this is a side lateral raise and NOT a front raise. If you raise the weights too far to the front of your body, all you’re really doing once again is training the anterior head of your shoulder.

To really stimulate the side delts specifically and build up your overall shoulder width and thickness as effectively as possible, aim to keep only a slight bend in your elbows (about 10-30 degrees) and then raise your upper arms out to your sides rather than out in front of your body.

Side Lateral Raise Mistake #4
Keeping Your Abs Relaxed Throughout The Exercise.

You should always aim to keep your core nice and tight on virtually any exercise you perform in the gym, and side lateral raises are no exception.

In fact, forcefully flexing your abs and keeping your ribcage locked down throughout the entire lift is actually one of the key ways to maximize the tension on your side delts.

Doing so takes your spinal erectors out of the equation and also helps to prevent your upper body from swaying backward as you raise the weights up.

Practice this one and get it nailed down and you’ll feel a huge difference in your ability to contract your side delts on each rep.

Side Lateral Raise Mistake #5
Allowing Your Hands To Raise Up Higher Than Your Elbows.

When you raise the weights up and finish each rep with your hands higher than your elbows, what you’re actually doing is performing external rotation of your shoulder joint rather than the intended movement of shoulder abduction.

This usually happens as a result of trying to “heave” up a weight that is too heavy, and it completely defeats the purpose of the exercise by causing the infraspinatus and teres minor (two muscles of the rotator cuff) to become the prime movers in the lift.

In order to ensure that the side delts are performing the bulk of the work, always make sure that your hands and elbows are directly in line with each other as you raise the weights up, and that one is not higher or lower than the other.

Side Lateral Raise Mistake #6
Lifting Your Upper Arms Above Parallel To The Floor.

When your upper arms travel past this position, the tension leaves the lateral head of the shoulder and is shifted onto your upper traps instead.

Although not as crucial a mistake as some of the previous ones I’ve outlined, you’ll still be best off to raise your upper arms up until they’re parallel to the floor but no higher, and pause for a brief second in the fully contracted position before lowering the weights back down.

Side Lateral Raise Mistake #7
Using Dumbbells Only Rather Than Cables.

This is somewhat of a “bonus” tip, as it’s not necessarily a mistake to perform your side lateral raises with dumbbells, and you’ll still get a great shoulder workout that way.

However, if you want to fully maximize the stimulation of your side delts for optimal gains in hypertrophy, I’d highly recommend performing your side lateral raises using cables, or at least mixing in some cable work along with your dumbbell raises.

The reason for this is simple. Given the path of the weights and the force of gravity (which pulls the weights straight down), dumbbell side laterals only produce a high degree of tension on the side delts in the top half of the range of motion. At the bottom of the movement when you’re simply holding the weights out to the side of you, there’s almost no stress on the shoulders at all.

Cable side laterals solve this and provide consistent tension on the side delts from the very bottom of the range of motion all the way to the top, since the resistance is out to the side rather than straight up and down.

My recommendation here is to perform your cable side laterals one arm at a time and to hold the attachment in front of your body rather than behind your back, since placing your elbow behind your shoulder on this movement slightly reduces the activation of the side delts.

If you’ve been making more than a few of the side lateral raise mistakes outlined in this article, my suggestion is to reduce the amount of weight you’re currently using and then gradually build back up while ensuring that you’re employing all 7 of the guidelines given here.

Remember, lifting excessively heavy weights with improper form is doing nothing to improve your bottom line muscle gains. Sticking to more moderate resistance while focusing on producing maximum tension in the targeted muscle is a much smarter way to go.

5 BODYBUILDING DIET TIPS TO HELP YOU STAY CONSISTENT
WHY A “HEALTHY DIET” IS NOT ENOUGH FOR REAL MUSCLE GROWTH & FAT LOSS
DOES FASTED CARDIO BURN MORE FAT?
HOW TO “MINI CUT” AND LOSE EXCESS FAT DURING A BULK
IS 30 REPS PER SET EFFECTIVE FOR BUILDING MUSCLE?
“WHY CAN’T I LOSE WEIGHT?!” HERE’S THE #1 REASON