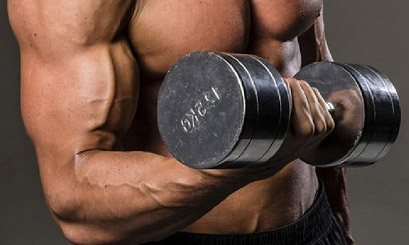 With the possible exception of the chest, no other muscle on the body tends to be given as much attention and focus in the gym as the biceps do.

Despite the fact that it’s actually a very small muscle in comparison to other larger (and arguably much more important) muscle groups, every lifter out there wants to develop that thick, impressive set of arms, and typically places their bicep workout as a top priority in their program.

If you really want to build up your biceps with maximum effectiveness and efficiency though, you need to have an understanding of what these muscles actually do and how to mimic their exact functions in the gym for optimal stimulation and growth.

The basic function of the biceps that pretty much everyone already knows is elbow flexion. In other words, “curling” your forearm towards your upper arm. 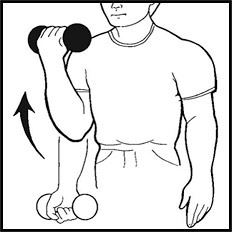 Although there are virtually hundreds of different curling variations you could choose from, every single one of them will involve flexing at the elbow in some fashion, whether it be with a barbell curl, cable curl, dumbbell curl or machine curl.

Any time you perform any basic compound exercise for your lats (such as chin ups, pulldowns and rows), you’ll also be utilizing a certain degree of elbow flexion as well. In fact, getting progressively stronger on these lifts will build your biceps up very significantly on their own even if you never performed a single bicep isolation exercise.

Although most people think of the biceps as only flexing the elbow joint, there’s also a second primary function they perform as well: forearm supination. In other words, twisting the forearm until your palm is facing upward. 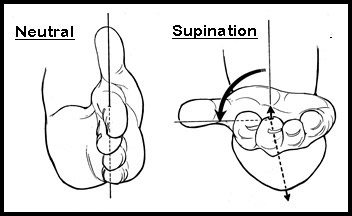 For that reason, your bicep workout is not complete without a curling exercise that also incorporates forearm supination into the movement.

This is especially important when you consider the little-known fact that, during pure elbow flexion exercises where the palms are facing up the entire time, the brachialis (another upper arm muscle that sits underneath the biceps) is just as, if not more active than the biceps are.

So, by including forearm supination in one of your curling exercises, you can be sure that you’re achieving complete stimulation of your biceps for the very best possible gains.

The best bicep exercise for this purpose is the supinating dumbbell bicep curl.

A lot of lifters already do include this lift in their bicep routine, but most don’t realize that it should be a staple exercise in any workout designed to maximize bicep hypertrophy. 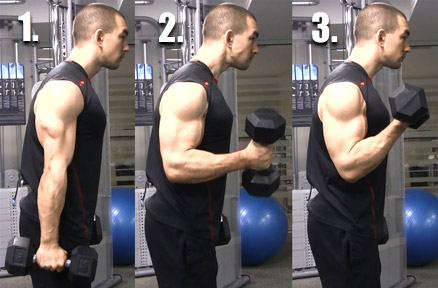 1) Hold a pair of dumbbells at your sides using a neutral grip, palms facing inward toward your body.

2) Curl the weight up while twisting your forearm at the same time, so that at the top of the movement your palm is facing the ceiling.

3) Lower the weight following the same path, and twist your forearm downward so that your hands are in a neutral position again at the bottom.

Supinating dumbbell curls can be done either seated or standing, and you can perform them by curling both dumbbells at the same time, or in an alternating fashion. I personally perform them using the standing/alternating variation, but feel free to experiment and see which one you prefer.

Although these may seem extremely simple on the surface just as most bicep exercises do, there are still several important things to keep in mind if you really want to optimize bicep stimulation and reduce the chances of injury as well.

I covered these tips in a previous post where I went into detail on proper bicep curl form, but here’s a refresher in case you missed it…

Tip #1: Keep your elbows and shoulders stationary and don’t allow them to drift forward as you curl the weight up. Some minor movement is normal and is to be expected, but letting them drift too far forward takes tension off the biceps and shifts it onto the front delts instead.

Tip #2: Don’t allow your elbows to flare out to the sides. This usually happens when you try to heave up a weight that is too heavy for you, and all it does is move the stress onto your shoulders and elbows. Instead keep them pinned at your sides at all times.

Tip #3: In order to fully lengthen your biceps and utilize the largest range of motion possible, flex your triceps at the bottom of each rep. This also reduces momentum by bringing your biceps to a dead stop before curling the weight back up.

Tip #4: Keep your wrists aligned in a neutral or slightly extended position. When you flex your wrist as you perform your curls, you shift more of the load onto your wrists and forearms and also increase your chances for injury as well.

Tip #5: Keep your back relatively straight and minimize the use of momentum. A bit of natural sway in your body is fine, but grabbing a pair of way-too-heavy dumbbells and aggressively swinging them up while leaning your torso back is only increasing your chances for lower back injury rather than building your biceps more effectively.

Bonus Tip: This is one that most people aren’t aware of but that can help you place a bit more tension on the biceps with this exercise…

Instead of gripping the dumbbell right in the middle, “choke up” a bit and grip it at the top of the handle instead. Having the dumbbell off-center like this will force the biceps to work even harder through that supinating function for some additional stimulation and growth.

How Many Sets And Reps? 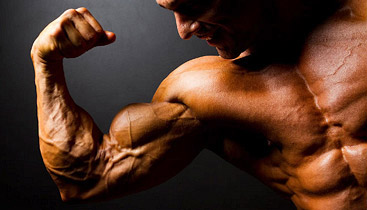 A good guideline to follow for your supinating dumbbell bicep curls is 3 total sets utilizing a rep range of 5-7 per arm. You can go as high as 12 reps on these if you want, but I generally prefer a low to moderate range here.

To structure a complete bicep workout for maximum gains in hypertrophy, just pair this exercise with any basic “palms up” supinated curl, such as a barbell curl or cable curl.

Remember, the biceps are actually a very small muscle and are hit very hard during all of your compound back exercises, so they don’t require much direct stimulation in order to growth to be maximized.

A barbell curl or cable curl (or some other type of machine curl) in combination with a supinating dumbbell bicep curl is really all you’ll need to achieve the very best gains.

1-2 YEARS FOR THE REST OF YOUR LIFE (KEY FITNESS MINDSET)
YES, IT’S NORMAL TO FEEL HUNGRY DURING A CUTTING PHASE (VIDEO)
MY EPIC DIRTY BULKING FAIL (30+ POUNDS OF FAT GAIN)
CABLES VS. FREE WEIGHTS: 7 EXERCISES WHERE CABLES ARE SUPERIOR
HOW TO USE PROTEIN POWDER: YOUR SIMPLE STEP-BY-STEP GUIDE
THE REAL TRUTH ABOUT INTERMITTENT FASTING